The meeting was two-centred, at the Holiday Inn, Taunton for the first few days and the Carlyon Bay Hotel, St Austell for the remaining days. In this, the second of my three informal reports on the meeting, we move from Taunton to St Austell. 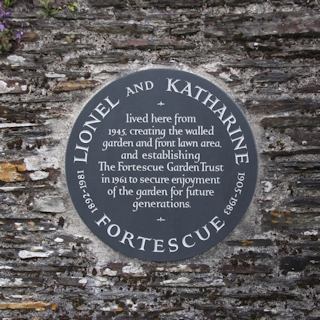 Transfer day today, with a move from the Holiday Inn, Taunton to Carlyon Bay Hotel, St Austell. It's a reasonable distance so we're breaking the journey with a visit and lunch at The Garden House, Yelverton, Devon.

Fiona and I are travelling in our own car and decide to take the scenic route across the middle of Dartmoor. We certainly get plenty of time to see the scenery as we get caught in the middle of a cycle race. Overtaking a large group of cyclists on the narrow and windy roads of Dartmoor is not easy. We arrived just as the rest of the party were getting off the coaches.

The history of The Garden House starts in 1945 when Lionel Fortescue, a teacher at Eton College, retired and with his wife, Katharine, moved into the former Georgian vicarage in the middle of a 10 acre plot. They set about designing and developing what is now recognized as one of the finest gardens in the West Country. Fortunately they had the foresight to create a charitable trust to maintain and enhance the gardens after their deaths in the 1980s.

Above - The Georgian House at the end of the lawn

Below - The Lawn, looking in the other direction

As you enter the gardens, the first thing you see is the large lawn, with a view of the Georgian vicarage at one end. Paths lead off in all directions but their destinations are hidden from view. There is extensive planting around the lawn.

We wandered down towards the Walled Garden, enjoying the wildflowers planted on both sides of the paths and roads. We paused on the outside of the Walled Garden but decided to leave that until later as we went off in the other direction, down a path through the woods, skirting a small round Dovecote and then up to Wisteria Bridge.

Old stone buildings and ruins in the Walled Garden 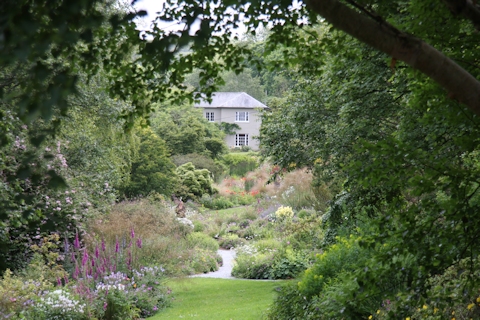 Next morning and, for the first time, it was raining. Not that hard admittedly, more a steady drizzle, but still wet. It was a short drive to Pinetum Park and Pine Lodge Gardens and not far enough for the weather to change.

However, being gardeners, we know the value of rain and certainly don't let a little bit of water stop us getting out and about.

Pinetum Park and Pine Lodge Gardens comprises 30 acres divided into 12 separate gardens, each with a different theme and different planting. There are meant to be over 6000 labelled plants within the grounds, which I could well believe though I wasn't going to try to count them all.

Located on the site of the Cuddra copper mine, the land was bought in 1974 as a showpiece for the plant collection of Ray and Shirley Clemo, who created the gardens. They are currently owned by Chang Li and he boarded each coach to give a short introduction before allowing us the freedom to wander in any direction. However Chang Li suggested that we following the marked trail to make sure of seeing all areas, and this seemed good advice. The gardens are close packed, but the planting and meandering paths mean you cannot see the next one until you enter it.

Whilst some of the garden names are slightly fanciful, the different gardens really are very impressive. Each has a very different theme.

The vast majority of the plants were labelled, which for a collection of this size is no mean feat. However the weather made note-taking very difficult so you'll have to enjoy my photos without most of this information.

There are over 20 names areas within the Park and Gardens. I wouldn't want to judge one against another, they were all quite different, but my favourites were the Arboretum, Winter Garden, Sunken Garden and the Japanese Garden (don't know quite why but I am always drawn to Chinese and Japanese gardens).

Even in the rain it was a most enjoyable visit, but don't just take my word, go yourself.

Views of the Japanese Garden

The Lost Gardens of Heligan

Fiona and I had visited The Lost Gardens of Heligan once before, in 2000. At that time there was still much restoration work to complete, and even some to start, but I remember the visit fondly. The treasures already uncovered were amazing. So did our second visit have the same impact? I'll tell you that later, for now it's time to have a look around.

It was a bit overcast when we reached the gardens, with a chilly breeze that encouraged you to wander around rather than stand and admire. Fiona and I made our way to the walled vegetable garden. Beautifully laid out, it is very large and very productive. Produce is used, I believe, in the various cafés and restaurants around the gardens and some is also sold in the shop. And sometimes you can be lucky as we were when, later in the afternoon, we strolled back this way and came across a basket of strawberries with a "Please eat me" sign!

In many ways mirroring the vegetable garden is the flower garden, used for the floral displays that would have adorned the dinner tables of Heligan House. From the large walled vegetable garden you go through into a smaller area containing the old, restored (I think) cold frames, and wonderful constructions they are too. It also has a melon house and a pineapple pit, a deep covered bed which would have been filled with manure to generate heat to grow and ripen pineapples, a rare and highly prized crop.

Just outside of this are the Bee Boles, alcoves built into a brick wall within which you put you skeps - the woven basket hives for the bees. The Boles protected the skeps, and therefore the bees, from the worst of the weather but unusually, the ones at Heligan are fitted with doors. The Italian Garden was one of the first parts of Heligan to be restored. It's quite amazing that it was even discovered, it had become so overgrown. Small but of classic / formal design, it is a very calm and peaceful place. Close by is the Northern Summerhouse, meant to be one of the oldest buildings at Heligan. For me, the beauty of this place is the flag stoned area , small fountain in the middle, and fantastic view out towards St Austell bay. A perfect place to sit on a summer evening.

However for me there is one place above all others at Heligan that one must see - the Jungle. Containing ferns, palms, bamboo, gunnera and associated plants, how anyone had the vision to construct this I do not know. It looks as if it has been here for centuries. As you go down, through a number of levels each with a pond that feeds the next, it is hard to believe that just the other side of this valley there are open fields. It is very difficult to capture the size of the plants and denseness of planting in photographs. I have tried with the following pictures, but there is only one way to really understand it and that's to visit and wander through it!

Views of the Jungle

Bamboo, ferns, gunnera and palms around the ponds 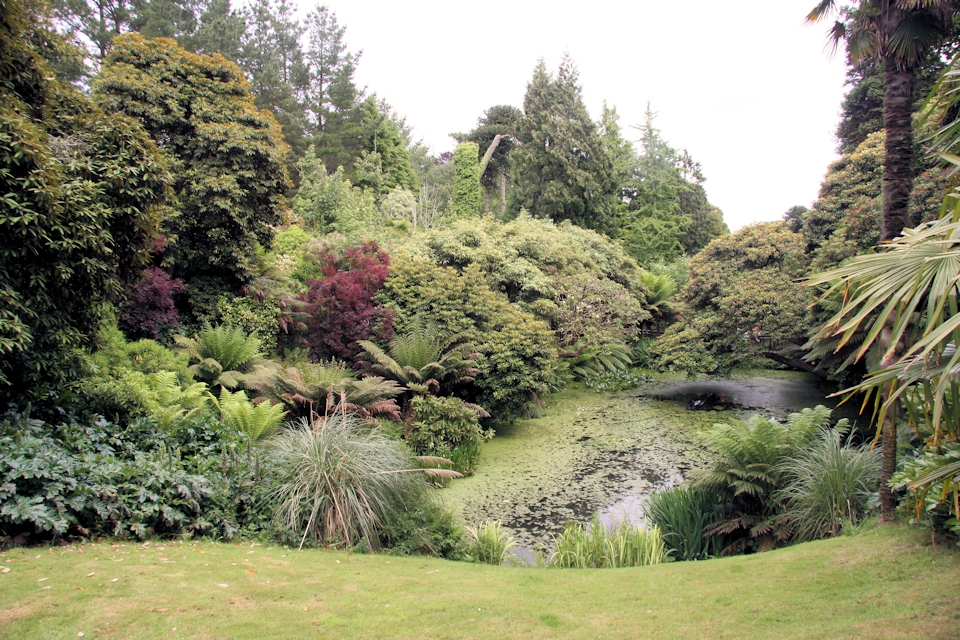 Time went too quickly, one could easily have spent all day here and still not seen everything. However I will leave you with two more features. To commemorate the centenary of the start of World War 1, Heligan created its own tribute by planting a field of poppies. It had special significance here since it signalled the start of the decline of the estate. Secondly and on a much less serious note, are the two sculptures, the Mud Maid and the Giant's Head.

Back to my question re this second visit for us. Did it have the same impact as the first time - the answer is both yes and no. The gardens are still quite amazing, very well worth a visit. I think, though, that some of the wonder of Heligan is in the story of discovery and restoration, and whilst they are still not finished (and probably never will be), they are neater and tidier. If you don't know of the story of Heligan, you may find it difficult to see it in the gardens as they stand today.

But I will never tire of visiting the Jungle!

It was time to move on, but not back to our hotel, for tonight we were visiting and dining at Healey's Cyder Farm. I wasn't quite sure what to expect, but certainly not the smart modern building at the centre of the complex. First things first, as we went into a large dining hall and were served dinner, very efficiently considering the size of our group. Then it was time to break into three groups for a tour of the orchards, tour of the manufacturing facility and, finally, a tasting.

For the orchard tour we boarded a trailer hitched to a tractor and set off. Our guide gave a very interesting explanation of the ins and outs of growing fruit for cyder - what makes a good apple, how they are blended for different characteristics. There's a lot more to cyder making than growing a few apples, crushing them, collecting the juice and fermenting it. Next was a walk around the processing plant. A brand new facility, all stainless steel and highly automated, it was due to go online in the next few weeks and will enable Healey's to significantly increase production, for which they have big plans. It's worth pointing out at this stage that this family firm was responsible (some years ago) for the Austin Healey sports car, a British classic of the 1950s and 1960s. They had three models in their entrance hall, and very smart they looked. The final part of our tour was a tasting. Their premium product is Rattler, which I found completely different to cider I had drunk many years ago. It had a complex taste, a good sharpness and was quite a revelation.

But I was also surprised and interested to see they distil whiskey. The first barrel was bottled and released in 2011 and has received high praise indeed. It's a premium product, in short supply and commands a high price, but it was also possible to pay for a taste, which I did. My personal verdict, very much a single malt with a very clean and rounded taste. You need to be rich to buy a bottle, but if you like whiskey it's well worth having a sample.

Next month my last report will cover visits to the Eden Project, Trebah Gardens and Roseland House, as well as our Gala Dinner. Don't miss it!

To read the first of my reports, please click here.