The meeting was two-centred, at the Holiday Inn, Taunton for the first few days and the Carlyon Bay Hotel, St Austell for the remaining days. In this, the third and final of my informal reports, we visit a hole in the ground, a valley running down to the sea and a house that grows polytunnels.

In 1995 Tim Smit, already known for his work on the Lost Gardens of Heligan, had a vision of how he could transform a old china clay quarry into an educational centre for world plants. The project gradually took shape, initially in the minds of those involved, then in the quarry, using the concept of Biomes (bio-domes). Construction started in late 1998 and the first visitors were welcomed to the partially finished site in 2001. By the tenth anniversary of opening, 13 million people had visited this unique venture.

The main elements of the Eden Project are the two large biomes - the Rain forest Biome and the Mediterranean Biome, the Core - a display / exhibition / educational centre, the Outdoor Gardens - landscaped into various different areas, and the Visitor Centre - the entrance which also houses a shop and plant sales.

Being constructed in the centre of a quarry, it's a downwards walk from the parking to the entrance, though there is a "land train" for those who wish to spare their feet. Having gone through the entrance, it is worth stopping on the observation platform to get a view of the whole Project. It really is quite breath-taking. Although the vista is dominated by the two Biomes, you realize there are landscaped gardens all around the quarry sides and base.

So much so that there were many different zig-zag paths for us to take as we all headed down into the quarry and, for most people, to the Rain forest Biome. In fact our coach driver had suggested this was a good place to start as even in the morning it would be quite warm inside the dome, by the afternoon on a sunny day like today it would be distinctly uncomfortable.

Even through Fiona and I had visited before (albeit fairly soon after it opened, so with a single and quite sparsely planted Rain forest Biome only) it is still very impressive - though the vista is more the sort of thing you'd see in a science fiction film than in Cornwall.

There was some very interesting planting as we made our way towards the Rain forest Biome. I especially enjoyed the ferns, waving merrily in the slight breeze. And we also found clematis.

Inside the Rain forest Biome and the first impression is the size. It is enormous, and very high. For much of the time you can't see the top or sky outside because of the forest canopy, but there are a few places where you get a view across the forest. One of these is the treetop walk, highly recommended as this gives a very good overview if the entire planting. There is a strong educational theme to much of the Eden Project and here was no exception. An emergency shelter, designed for Vanuatu in the South Pacific Ocean, showed how a protective structure can be constructed from the scarce materials available after a natural disaster.

There were also displays showing how rice is cultivated, and of other crop plants, like these bananas.

Wandering around we suddenly heard a scratching coming from the undergrowth and a bird suddenly appeared. It seemed quite unworried by the visitors and happily picked at the ground for edible morsels.

I've already mentioned the treetop walk. It certainly did give a new perspective on the biome, especially the sheer size of the enclosure, but also how some trees are already reaching the top. 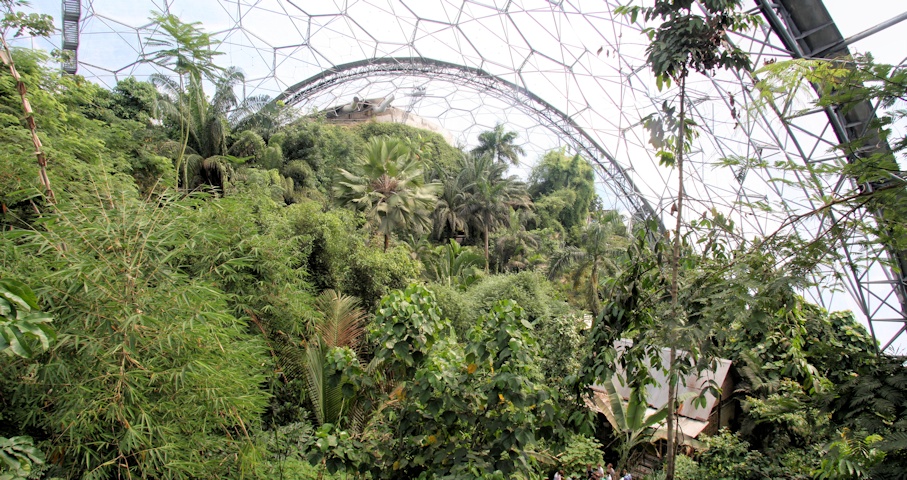 View from the Treetop Walk

I've concentrated on the Rain forest Biome. For us this was the most spectacular and most enjoyable. The planting in the Mediterranean Biome, whilst interesting, was possibly a bit more familiar to us and because of this, a little less inspiring. The Core, a very new centre, has primarily an educational display and exhibition function. Children seemed to be enjoying themselves, and we left them to it. 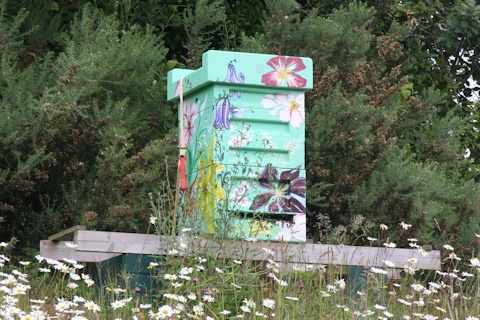 I think that to have been in this area and not visited the Eden Project would have been very wrong.

We finished our visit with a wander around the gardens on the sides of the quarry. I suspect many visitors don't bother with them but this is a shame. They are missing some very good planting and interesting information panels.

The Eden Project is unique and shows how, with imagination and self-belief, just what can be achieved from a hole in the ground. It was evident from the many school parties that the very strong educational theme resonates well with them, it's an enjoyable way for them to learn about many different things to do with nature and nature conservation. But there is much to recommend it to anyone who enjoys plants from around the world.

As we walked back uphill to the coaches, I took another look at the beehives, perched on top of a high bank by the side of the road. Painted with a floral design, could one of those blooms be modelled on a large-flowered clematis? I'd like to think so.

Our last day and the sun was shining upon us. Unfortunately the scheduled visit to Primrose Farm had had to be abandoned due to personal circumstances. But every cloud has a silver lining and for us this meant a little longer at Trebah Gardens and Roseland House.

Trebah Gardens was founded in 1838 by Charles Fox, a wealthy Quaker whose family had lived in Cornwall since the 17th century. Philanthropic, they created a number of gardens in Cornwall for the pleasure of the people. They imported exotic plants from around the world, a formidable task although it was made slightly easier for them due to their involvement in the shipping business.

Charles planted hundreds of various trees down either side of the valley to provide protection against the weather, and many of these survive to today. After his death, his daughter and her husband carried on the development of the garden, and it is their planting plan which is largely still maintained today.

Although the garden passed through a number of hands, including Donald Healey of sports car fame (see also our Cyder Farm visit in my second report), and two world wars, the exotic plant collection remained largely intact.

The latest chapter in the history of Trebah saw the Hibberts buying the property in 1981 as a retirement home. They were persuaded to start restoration work on the garden and it was opened to the public in 1987. The house, garden and cottages are now owned and run by the Trebah Garden Trust, a registered charity, created to preserve and maintain the property for the enjoyment of the public, now and into the future.

Essentially the garden is formed down a valley that runs from the Georgian house down to a beach and the sea. On either side of the valley, and the valley floor itself, exotic plants form great swathes of green foliage.

The scale of Trebah is massive, and a great demonstration of this was evident from one of the first sights, a gigantic gunnera. But there were some delicately planted areas as well, witness the path at the head of the valley and a pretty pond with heron statue.

My favourites were the bamboo groves, apparently with 39 different types, closely followed by the tree ferns. This is gardening on a massive scale and it was done very effectively.

As you got close to the beach, a large pond came into view, and from the far bridge you got a wonderful view up the valley towards the house. Turn the other way and, from the beach, the bay stretched out around you. It's an idyllic setting made even better with the planting.

There was much to see at Trebah and time went very quickly. It's a place to which I'd like to return, perhaps at a different time of the year (they also have azaleas, rhododendron and hydrangea), though the bamboo would be spectacular at any time of the year, I think.

From the vast valley garden of Trebah, our final visit of the meeting was to Roseland House and Garden, home of Charlie and Liz Pridham and their specialist nursery. They also hold a National Collection of Clematis viticella, as well as Lapageria rosea cultivars.

As we walked into the garden from a side entrance, it appeared to be a nicely kept, fairly straightforward English cottage style garden, with a decent sized lawn and a pond to one side. We immediately spotted clematis, they were all over the place, but it was only when we ventured around the side of the house we realized the garden went on forever. There were frames and fruit cages, greenhouses, polytunnels, recently created "alcoves" made into the brick wall surrounding the garden, the list is endless.

It's the sort of garden you can lose yourself in for hours. So many different areas, unexpected corners around which you suddenly find something completely new, plants tucked away and only visible from one angle.

As I have said, Charlie and Liz run their nursery business from here and it didn't take long for members to discover the clematis (and other plants) that were for sale. However then came the task for those flying home to other countries of bare-rooting their plants. Charlie provided the necessary facilities and soon there was quite a production line running, people on their hands and knees washing plants and laying them out on the grass.

Charlie and Liz were very hospitable and had laid on tea and cakes, homemade and delicious.

It was a great final visit for our time in Somerset, Devon and Cornwall. 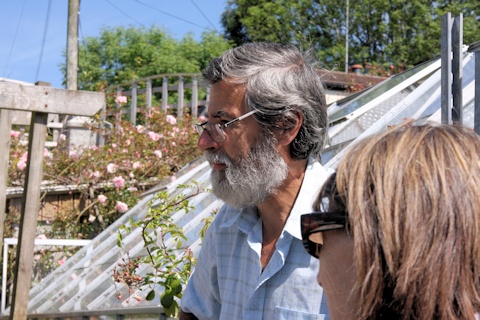 There was still just one more event to go, the Gala Dinner. We were back in plenty of time to get changed for the evening event, held in the adjoining Golf Club House of the Carlyon Bay Hotel. Just a short walk from the hotel, we enjoyed a very good dinner, and there was even live music and some dancing afterwards. 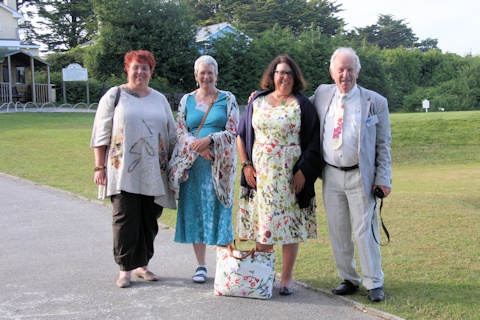 As we strolled back to the hotel, someone mentioned a clematis they'd seen through the gates of a nearby house. Fiona and I went to investigate the following morning (fortunately before it started to rain) and found one of the best examples we've seen of C. florida var. sieboldiana.

I leave you with the customary group photo, taken on the lawn at the back of the Carlyon Bay Hotel. Our thanks to Roy and Angela Nunn and helpers for organizing such a memorable meeting.

So ends my third and final report on UK2015. I hope you've enjoyed them. Don't forget, there will be full coverage of the meeting in the next issue of our journal, Clematis International 2016.