This is the first of my informal reports on our short visit and meeting in the Netherlands in August 2003. You will be able to read about it in more detail in Clematis International 2004. For now, though, I will give you a taste of where we went and what we did, though in no particular order. Click on these links for my second or third report.

The Netherlands was chosen for our visit and meeting this year following a poll of members at our conference in Poland in 2002. It was the first time the International Clematis Society has visited this country so we were all looking forward to new experiences. The Netherlands is known throughout Europe if not the world for its horticulture and the programme reflected this, with visits to 3 private gardens and 6 nurseries.

We gathered on Thursday afternoon at our motorway hotel and spent a pleasant evening renewing old friendships and making new ones. With 47 attendees from 11 countries (not including those from the Netherlands who joined us during the programme) this was an impressive group, especially for a 4 day meeting. 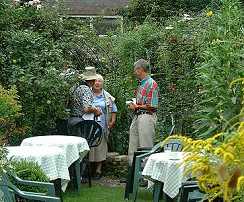 Our first day, Friday, and we were up and off early, heading north east towards Zwolle to visit 'Het Hoornwerk', the private garden of Roelie van der Meulen. It is just outside the city centre of Zwolle, behind one of the first summer houses to be built here around 1830. Roelie has opened her garden to the public for the last 6 years. 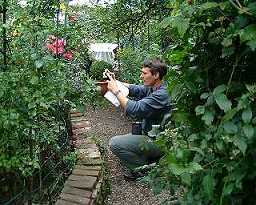 Typical of many gardens in the Netherlands, it is not large and to avoid total overcrowding, Roelie and some of her friends had organized coffee and cake (a wonderful apple and cinnamon pastry, a very typical dish) and a video of some of her clematis for half the group whilst the other half wandered through the arches and paths in her garden. 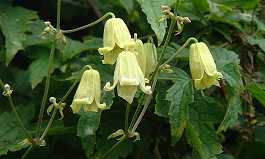 Roelie has a huge number of clematis, especially for a garden of this size. Unfortunately, as we all know, the unusually hot weather this year has meant that the flowering period of many clematis has been severely shortened. However there were still many interesting clematis, and other plants to see and photograph. On the left you can see a splendid example of C. veitchiana.

Over the years Roelie has developed the garden, putting in new paths and arches, to encourage you to wander where you will, knowing there is bound to be something interesting growing around the next corner. Her web site at http://www.clematistuin.nl tells much more. But far better, if you're ever in the neighbourhood, stop by and visit. 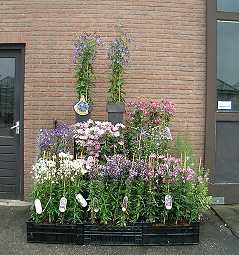 One of the most notable nurseries we visited during our short stay in the Netherlands was that of Jan and Lina van Zoest in Boskoop, centre of the Dutch horticultural industry. Last year Wim Snoeijer joined the nursery to run the breeding programme and we were very interested to listen to him explain their aims and ambitions in this direction.

As we walked into the nursery we were immediately greeted by a striking display of some of their latest introductions, including C. 'Fascination', C. 'Hendyetta', C. 'Pretty in Blue', C. 'Pamela', C. 'Blue Pirouette' and C. 'Queen of Holland'. The last of these was, in fact, presented to Queen Beatrix when she visited Boskoop and this nursery recently. 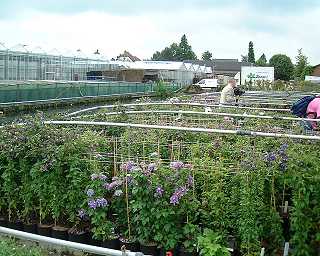 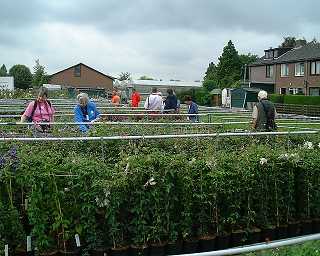 Of great interest to many of us were the trial beds, where new and unnamed clematis are grown, flowered and judged as worthy of introduction or, as happens to the large majority, not sufficiently distinguished or unique to warrant further care and attention and discarded. It demonstrated graphically the variation that can be achieved across the seedlings of just one cross. 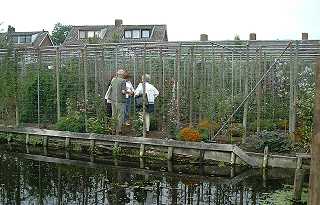 Boskoop is laced with canals, they used to be used to transport the plants though nowadays they are more for leisure and tourist trips. So to look around the private clematis collection housed at the nursery, we had to cross over a small bridge to get there. This collection was originally owned by John Fopma, Dutch clematarian and expert for many years. It now also contains some of the selected new clematis, in their last test to decide whether or not they are worthy of a new introduction. 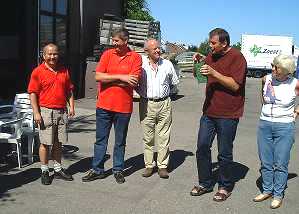 The nursery of Jan van Zoest is one of the largest in western Europe and our time there soon passed. One could easily have spent the whole day there, but with many other visits to make, the morning was all we could manage in our programme. So a "Thank You" to Jan and Lina van Zoest, Wim Snoeijer, Jan Fopma and all the staff who helped answer our questions, and found the clematis we wanted to buy. And a special "Thank You" to Wim's mother and his partner who made 50 lunch bags for us today, and another 50 on Monday! 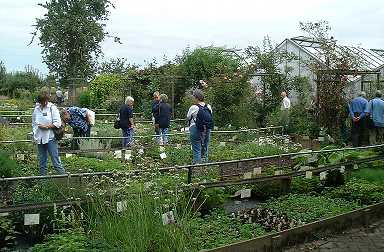 In total contrast to the nursery of Jan van Zoest was "De Vijfhoeven", a small nursery owned and run by Jan and Marie-Louise Kuijk. They specialize in perennials and have a particular passion for unusual and less commonly found plants. The business started as a farm run by Jan's grandparents. Gradually the livestock business was reduced and the horticultural business increased. 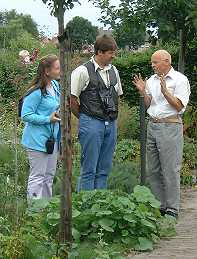 Our interest and enthusiasm for clematis is not to the exclusion of other plants and there was surely something for everyone here in this nursery. As one strolled around your eye was drawn first this way, then that, as one spotted another "little gem". The only difficulty was sometimes to remember where a particular plant had been found, should you wish to return to it.

As we wandered about the nursery we were for ever under the watchful eye of "Max", the trusty retainer of the nursery. I don't know his age, suffice to say he is of mature years, and for much of our time he sat in the shade of a large tree near the house. However when anyone took one of the biscuits that Jan and Marie-Louise had laid out for us, along with drinks and cake, he would suddenly appear. I think he was as well fed as we were that day!

You can't go to the Netherlands without seeing a windmill, they are everywhere. They are also, in general, very well restored and maintained, beautifully painted and often with very pretty gardens around them. But go to Kinderdijk, as we did, and you will be greeted by the sight of 19 windmills along either side of the canal. Go there on a Saturday afternoon in either July or August, as we did, and you should see them all turning, quite a spectacular sight. The windmills were used to pump water, to control the water levels in the canals. I finish this first report with five in a line. 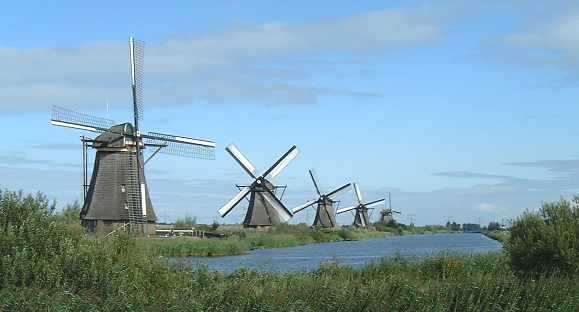