This is the third and last of my informal reports on our short visit and meeting in the Netherlands in August 2003. A complete set of reports by members will be published in Clematis International 2004. Click on these links for my first or second report. 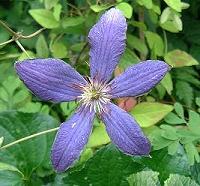 The third private garden we visited was that of Ton Hannink, an enthusiastic clematarian. His small but perfectly presented garden contained many clematis, including some bred by Ton himself. He tends to concentrate on texensis crosses, though there were few of these in flower when we visited. One that was, however, was C. 'De Vijfhoeven', shown here to your right. With his partner, Marjan van Hulten, Ton made us most welcome. They also ensured we did not leave empty-handed by laying out a large number of clematis and other different plants for us to take whatever we wanted. 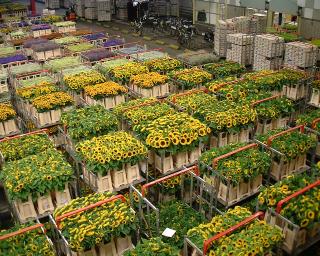 If you visit the Netherlands, one place you really should see is the Aalsmeer Flower Auction. The biggest flower auction house in the world, the auction building occupies nearly 1 million square meters of floor space. 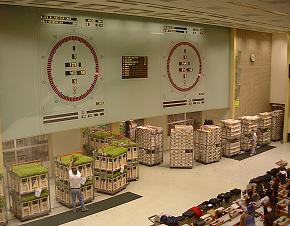 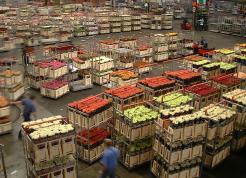 Flowers for sale are assembled in batches on trolley "trains" which slowly travel through the auction rooms. A maximum price is set for each batch on the clock, which then counts down until a buyer presses his or her button and the sale is made. The trollies are then taken out and re-assembled into buyer trains. The auction starts at 06:00 so you have to be up early, as we were that Monday morning, to catch the action. But I think everyone was very impressed at the colour, the activity and the beauty of the plants.

Pieter Zwijnenburg, shown above centre (he's the one wearing the diagonal stripes) has been breeding and hybridizing clematis for many years. We were very fortunate when we visited his nursery in Boskoop to find so many of his cultivars were still in flower. Above you see C. 'Elly' (left) and C. 'Anja' (right). 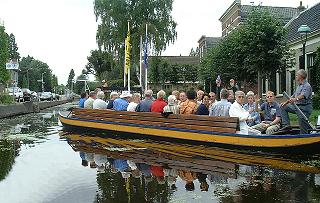 As I have mentioned a number of times, and you will also have seen in some of my pictures, Boskoop, the home of Dutch horticulture, is built around canals. In previous times they were used for the transport of materials and plants to and from the nurseries that grew up between them. These days they carry a different type of traffic—tourists. But the cruise that we took one sunny lunchtime was quite different from what one might expect. 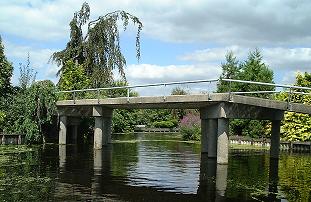 The boats are crewed by experienced. retired nursery workers who, not only inform you about the history of these waterways but also point out some of the many interesting and unusual plants, shrubs and trees that grow next to the canals. It's a very serene and peaceful way to explore the area. It also gave a very different view of some of the nurseries that we had already visited. The bridge you see on your right we had walked over, a day or two previously when we visited the nursery of Ruud van der Werf. Now we went underneath.

Everyone I spoke to at the end of the visit, or afterwards, said they enjoyed themselves tremendously, in spite of the busy programme. It was the first time the Society had met in the Netherlands, but from the warm welcome we received and the obvious interest and knowledge that exists in clematis, I'm sure it will not be the last. I leave you with members of our group, firstly with Roelie van der Meulen outside her house and garden in Zwolle, and at Kinderdijk. 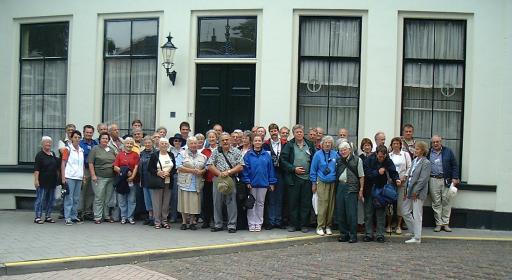 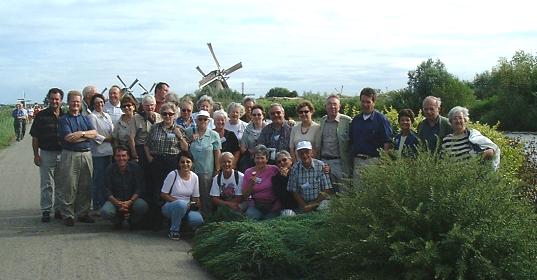