This is the second of my informal reports on our short visit and meeting in the Netherlands in August 2003. You will be able to read about it in more detail in Clematis International 2004. Click on these links for my first or third report. 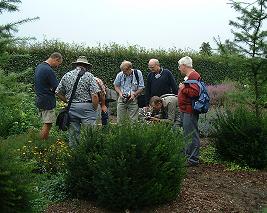 On Friday afternoon, under increasingly threatening skies, we visited our first nursery, "De Hessenhof", owned and run by Hans Kramer and specializing in perennial plants. Unusually for the Netherlands, this perennial nursery has its own stock fields, so you can see how the plant performs in the ground before buying one in a pot. 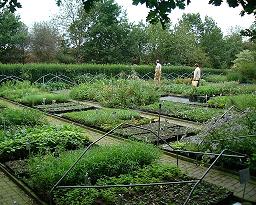 The first impression of "De Hessenhof" was, for all of us I believe, how neat and tidy the nursery looked. Everything in its correct place, barely a leaf on the ground in spite of the large trees that surround and shelter the nursery. The plants really invited you to pick them up and buy them, and many of us did.

One particular "find" was C. heracleifolia 'Cassandra'. This strongly scented herbaceous clematis originated at the Staudengärtnerei Gräfin von Zeppelin nursery which we visited during our short stay in Basel in 2001. But few members had come across such good quality specimens as these, so strongly scented and such a vivid colour, and amongst the plants purchased by our group at "De Hessenhof" were quite a few C. heracleifolia 'Cassandra'. 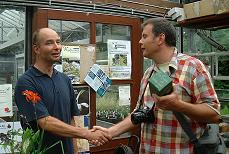 The skies, which had been threatening, or is it promising, rain finally decided to shed their load as we queued to pay for our plants and waited for the call to reboard the coach, but fortunately it was only a short shower. We thank Hans Kramer for his most interesting nursery, with its wide variety of plants and high quality of presentation.

Even such dedicated clematarians as we have in our Society enjoy a little relaxation during these meetings and our evening cruise, with dinner, on the waters of the Biesbosch Nature Park were an ideal opportunity for us all to sit back and watch the world go by, free from the hustle and bustle of the day. The number in our party meant we had the whole boat to ourselves, so there was plenty of opportunity to discuss the events of the day, or talk about something completely different, perhaps over a beer or glass of wine.

I must mention the dinner that was served on the boat. A cold and hot buffet, it really was very good and far better than is often provided on such cruises, both in its variety and quality.

We docked as the sun was setting, replete and content, and the coach journey back to our hotel was somewhat quieter than usual. 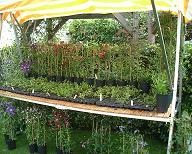 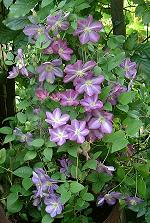 I guess an estate agent (real estate agent) would describe the average Dutch garden, especially if you live in a town, as "compact", even small, so accommodating nearly 50 avid clematis enthusiasts might be rather daunting for many. Not so for Jan van Acquoij, his wife Carin and their three daughters. Not only did they welcome us into their garden, they provided us with a feast of homemade blueberry tarts, various other delicacies, tea and coffee, all served by three small smiling faces. 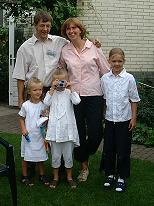 Jan is in the process of buying his own nursery but had still found time to prepare his garden immaculately for our critical eyes. A very well balanced planting scheme, Jan has combined his clematis with a good range of other plants and shrubs. And he'd also set up a stand of rooted clematis cuttings for us, a very generous offer that was eagerly taken up by our group.

Of the many clematis in his garden, one I noted in particular was C. 'Miniseelik', being grown here in a wooden tub. Compact yet with many flowers, it was a very good example of this Kivistik cultivar, and with Taavi and Aime Kivistik within our group, quite appropriate.

Our time to leave came far too soon. As we waved goodbye it occurred to me, that I wondered what three little girls would tell their friends at school about the strange people that came to their garden. 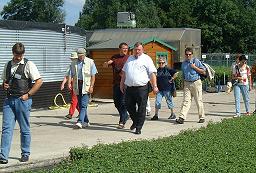 The final item in this report is the visit we made to the Nursery van der Starre. This is one of, if not the, biggest commercial nurseries in the Netherlands, and we visited just one of their four sites. Owned and run by Bart and Bert van der Starre, we were welcomed and shown around by Bart, in charge of the Marketing side of the business. Nursery van der Starre do not permit many visits, especially from groups such as ourselves, but we were shown all over the site, as well as being allowed to roam where we wanted.

This is growing clematis on a vast scale. Huge swaths of colour ripple across their growing areas in the breeze, one block of blue, another of red, and so on. Look inside one of the many glasshouses on the site and you may see a blue carpet of C. 'The President'. 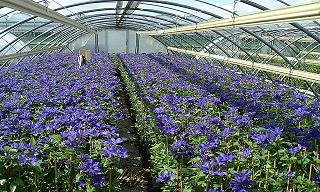 Nursery van der Starre sell wholesale to Garden Centres and other retail outlets in most European countries and quite possibly further afield. However in spite of their size and scale of production, many of us were very pleasantly surprised at the number and range of clematis offered. They have developed a unique oval-section pot in conjunction with their own-design display stand to further promote sales. 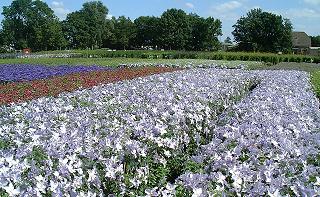 Whilst we, as enthusiasts may take delight in some very esoteric cultivars, we should not forget that probably 90% or more of all clematis sold to the general public originate with growers such as Nursery van der Starre. It is good to see they take this responsibility seriously and look to educate the public into buying and trying a wide range of cultivars. I leave you with a tranquil scene from our Biesbosch cruise, with the sun going down over a Dutch sailing barge. 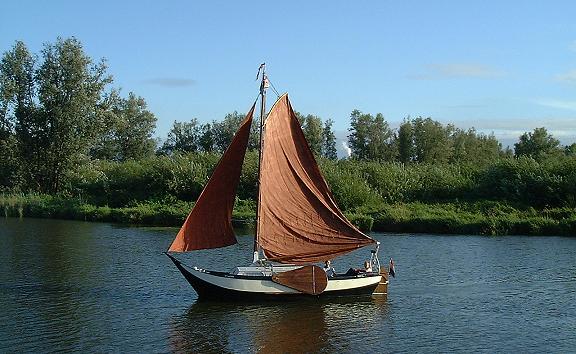