Clematis of the Month for November 2011 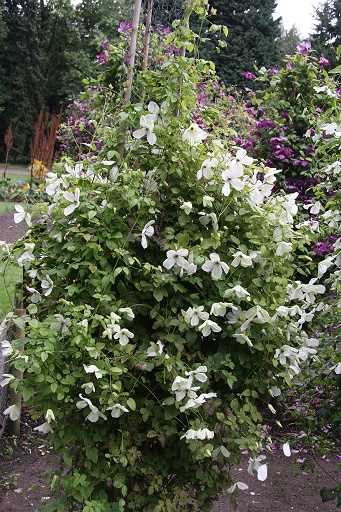 I've only grown Clematis 'Maria Cornelia' for a year but I'm impressed by her already. I first saw her last year (2010) in the RHS Clematis Viticella Trial at Wisley and immediately thought "I like this clematis" and so bought her for my garden. 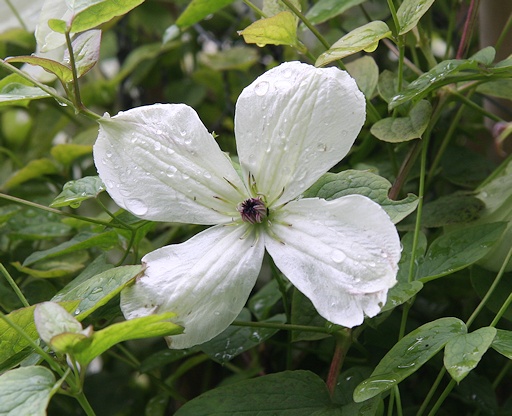 The flowers are small, only about 8 cms (3 inches) across and initially start as a hanging open bowl shape which as the flower matures become more upright and facing outwards. The flowers start a creamy almost greenish colour which matures to a pure white by the time they are facing you. However, it is the dark centres that are one of the best features of the flower. The centre is a very dark purple which sets off the white flowers so very well. 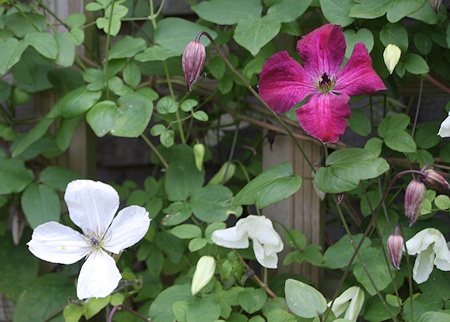 I planted C. 'Maria Cornelia' in my garden next to C 'Carmencita', bred by Magnus Johnson from Sweden, which has very similar sized and shape flowers with dark centres. The flowers of C. 'Carmencita' face outwards all the time so they look really good with the mature flowers of C. 'Maria Cornelia'. Unfortunately I have not got a very good photo showing the two plants with mature flowers together, but hopefully you can get the idea from this photo taken early in the flowering season of the two plants. Later on the pairing was excellent and one that I was very pleased with.

C 'Maria Cornelia' is a very useful addition to the range of white small late flowering clematis. For so long the only small flowered white viticella was C 'Alba Luxurians' which has very green and white flowers, and the flowers often stay green at first, untidy in its shape but familiar to everyone who knows the White Garden as Sissinghurst of Vita Sackville-West. Up to now the only white alternatives to C. 'Alba Luxurians' have been two clematis with small hanging cream/white flowers which are not widely available: C viticella 'Hågelby White' from Sweden and C 'White Magic'. C. 'Maria Cornelia' is an enjoyable contrast to all of them with larger and whiter flowers.

C. 'Maria Cornelia' may be new on the scene but has taken a long time to arrive. She was raised by Willem Straver in Emmerich-Elten, Germany in 2001, first flowered the following year, was named by the raiser in 2003 and registered in 2005. In 2006, C. 'Maria Cornelia' won a bronze medal at Plantarium, the plant fair held in Boskop, the Netherlands. I understand that J. van Zoest of Boskop has introduced the plant to the market and it is now generally available from clematis specialist nurseries.

Willem named C. 'Maria Cornelia' in honour of his mother; it is lovely clematis to have named after you!