Clematis of the Month for February 2012 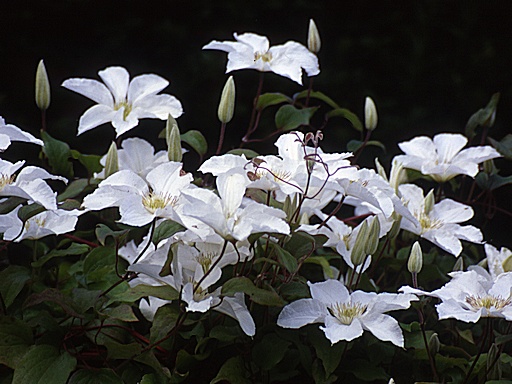 Clematis 'John Huxtable' is a good late large flowered white Jackmanii-type clematis which makes a change from the more usual purples and pinks in this group. The flower usually has 6 sepals although it may have from 4 to 8, and the flower is generally 10-15 cm (4 - 6 inches) across. The sepals have veining down them, slightly wavy at the outside edge and curve inwards to give the impression of a bowl shape. The stamens in the centre of the flower are slightly green when the flower opens and fade to white as the flower matures. The base of the tepals in the centre of the flower can also have a greenish tinge which makes the flower appear a pure white especially against its dark green foliage.

I planned to grow C. 'John Huxtable' with Clematis 'Margaret Hunt', an old pale pink cultivar, but C. 'John Huxtable' decided last year that it wanted to flower alongside C. 'Geoffrey Tolver', a more recent dark purple cultivar. Not the combination that I had intended but one that I was very pleased with. The white lifts the other colours and is good for the darker side of the garden. My experience so far is that C. 'John Huxtable' flowers from July through August and possibly into September in my garden.

C. 'John Huxtable' is categorized as a 'late-flowering' clematis in Pruning Group 3 so should be pruned in late Winter or early Spring to the lowest pair of buds; almost to the ground. This type of clematis wants to grow 2-3 meters (6-9 feet) before it flowers so pruning it is necessary to keep the flowers at a height where they can be viewed.

The plant originated in John Huxtable's garden in Devon and he gave the plant to Rowland Jackman in 1967. The general consensus of a number of clematis books is that John probably worked for Jackmans of Woking who introduced the world famous Clematis 'Jackmanii'. Again according to a number of books Jackmans then started to market C. 'John Huxtable' before they closed in 1967 but when they closed Rowland gave the plant to Raymond Evison, now of Guernsey Clematis Nursery.

I asked Raymond what he remembered about how he was given the plant and whether he still considers it a good plant, Raymond responded:

From what I remember Rowland Jackman brought the clematis called 'John Huxtable' to me at Treasures of Tenbury Limited for me to propagate and introduce into commerce. Rowland had been given the original plant by John Huxtable who was a farmer in Wiltshire. I believe it to be a seedling or possible sport from

I do not remember when Rowland gave me the plant, he frequently came to visit us and gave me other clematis as well to propagate. I guess this was about the time he was selling the old Jackmans Nursery. It then became a Garden Centre and he wanted to make sure

C. 'John Huxtable' was not lost. I don't know if Jackmans introduced the plant from their Nursery or not. Rowland was a great plantsman and was good at spotting a good plant.

C. 'John Huxtable' is a good plant, it is certainly a good Jackmanii type for later flowering.

Magnus Johnson in his book "The Genus Clematis" agrees with Raymond. In fact Magnus considered it to be the best white cultivar within the Jackmanii group.

A final note as I spotted in Barry Fretwells book "Clematis" from 1989 where Barry obviously knew John Huxtable as they lived near to one another in Devon. Barry comments that John Huxtable found that he could not grow Clematis 'John Huxtable' in his own garden. Such a shame not to be able to grow your own clematis especially when it is also named after you!