Clematis of the Month for November 2012 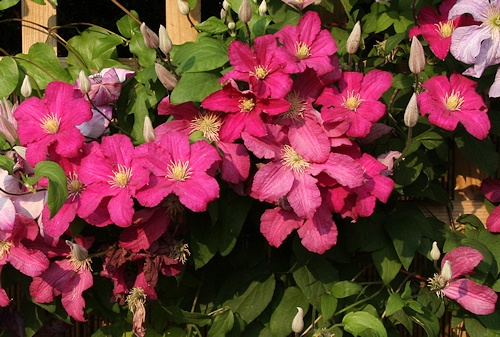 My choice for the Clematis of the Month this month is Clematis 'Remembrance'. It is a late flowering large flowered hybrid which should have finished flowering by now but the name seemed a good enough reason to choose it for November with Remembrance Day on the 11th November.

The flower is not poppy red but rather a raspberry red, described by various clematis nurseries as sometimes a light raspberry red. Note also that it can fade. In my garden it is planted on a west facing trellis and it does not fade sufficiently to cause me to comment on this. The flower has a textured surface and a nice bold golden contrasting centre. It should be pruned every year to between ground level and a few nodes high as if flowers on the growth that it makes in the same year.

You may wonder how this clematis acquired the name 'Remembrance'. I contacted New Leaf Nurseries in the UK who introduced it into the UK and asked how it came by its name. David Higginson kindly provided me with the following information:

"Peter Hoddinott our MD was walking the crop one evening and spotted a Clematis 'Comtesse de Bouchaud' with a stem flowering dark pink / red. From this stem we then took cuttings, waited to see if the result was the same and began to propagate. The first plant was spotted around 2000 but not released until 2007!

When we name plants we always ask our staff (there are 50 of them!) for ideas. One of our ladies had recently lost a member of her family and thought there are many plants celebrating events such as Ruby and Wedding Day but nothing to remember hence the name!"

I acquired my C. 'Remembrance' in memory of my father-in-law, so the naming of the plant obviously worked for me.

As David mentions above, C. 'Remembrance' is what is known as a "sport". This is where a plant produces a stem with a flower on it which not the same as the rest of the plant. The RHS defines sports as "naturally occurring genetic mutations that can change the appearance of the foliage, flowers, fruit or stems of any plant", visit the RHS website at http://apps.rhs.org.uk/advicesearch/profile.aspx?pid=259 for further information.

Often the result of a sport is to produce a double flower such as C. 'Blue Light'(N) which is a sport from C. 'Mrs. Cholmondeley' , but in the case of C. 'Remembrance' it appears to be just the colour of the flower that is different.

C. 'Comtesse de Bouchaud' which is the parent plant of C. 'Remembrance' features on the Society's Recommended Clematis list so C. 'Remembrance' should share all its parent's qualities and be equally a suitable candidate for the Society's Recommended Clematis list in its own right. Certainly my experience bears this out and I would recommend C. 'Remembrance' to you as it flowers reliably with an abundance of flowers in my garden. I grow it to intertwine with a number of other clematis. The red flowers look really good amongst the mid-blue flowers of C. 'Emilia Plater'.

P.S. In writing this article I discovered that C. 'Barbara Harrington' is also a sport of C. 'Comtesse de Bouchaud' but with red-purple flowers, so it is another potentially good plant to look out for. I have no personal experience of growing it but you can find some details at Clematis on the Web.