Clematis of the Month for February 2014 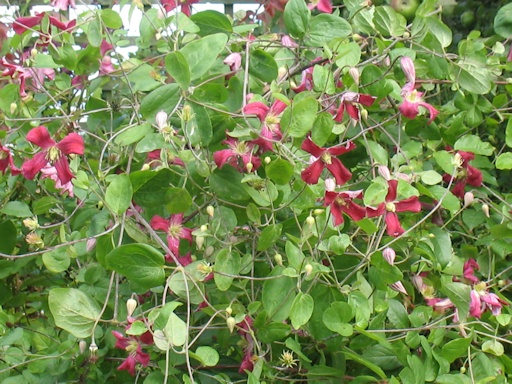 [Editor's Note: in August 2013 I received an email from Richard Hodson, from Hawthornes Nursery in Lancashire, praising Clematis 'Brocade' as "magnificent" and recommending it as a nomination for the Clematis of the Month. Richard supplied the photos and agreed to write a few words and these are below.

We are always delighted to hear from anyone of a clematis that has done well and that you would recommend to another.

If you are interested in trying C. 'Brocade' now would be a good time to plant it - if you can get hold of it!]

As part of the National Collection of Clematis Viticella here in our garden (http://www.hawthornes-nursery.co.uk/) on re-claimed marshland on the west coast of Lancashire, England, I have Clematis 'Brocade' listed as "Accession No 27, July 2001".

C. 'Brocade' was probably acquired at the local nursery of Vince and Sylvia Denny, or maybe T H Barkers at Ulverston in the nearby Lake District, both wonderful nurseries, sadly both now closed.

These roses, described as continuous, usually put on a gorgeous display of blooms in June, then the clematis take over.

C. 'Brocade' has never been a star performer here, always being outshone by the likes of C. 'Étoile Violette', C. 'Emilia Plater' or C. 'Madame Julia Correvon', but in the summer of 2013, we were treated to a magnificent display of blooms, much better than ever before, the colouring and number of blooms far better than previous years.

After all the rain of 2012 I thought most of the nutrients would have been washed out from the ground and that we would have had a pathetic display, but quite the opposite was true.

Spring of 2013 was very late to arrive here in Lancashire, by the end of April many of the clematis in the garden had still not re-appeared, we feared that some could have been lost in the flooding of 2012 and maybe would have had to be replaced, but no, the hot dry summer of 2013 was amazing, not just the clematis, but the roses, the phlox, the monardas and all the other flowering perennials growing here were outstanding.

C. 'Brocade' is described on the Peveril Clematis website as 'orange brick-red, unlike any other red shades amongst the large or small flowered clematis, even the shape is different-being more akin to the well-known montanas'. I personally have never likened the flower shape of C. 'Brocade' to a Montana flower which is typically flattish; the nodding bell shaped flowers are very viticella-ish. 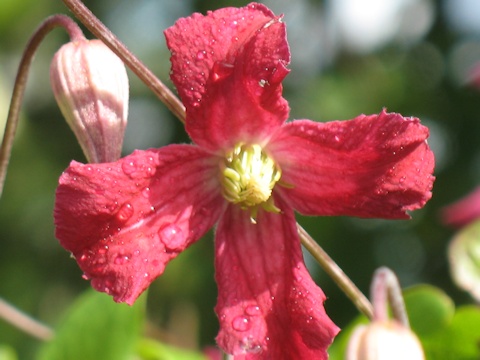 C. 'Brocade' - a montana shaped flower, or not? 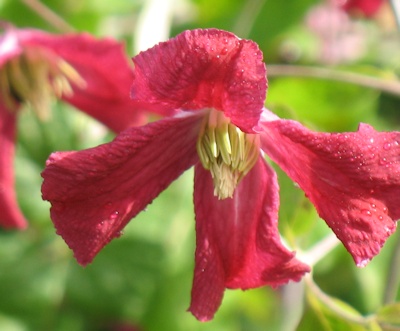 With writing this article in mind, I phoned Mr. Barry Fretwell, the raiser, a few months ago to see if I could find out any information about the parentage, "Barry, is there any texensis in the parentage of your C. 'Brocade', the colouring suggests so, also powdery mildew is sometimes evident late season?"

I noticed powdery mildew on some of the stems of C. 'Brocade' later in the season, possibly due to the lack of moisture in the soil; the mildew was not evident on any of the flowers. 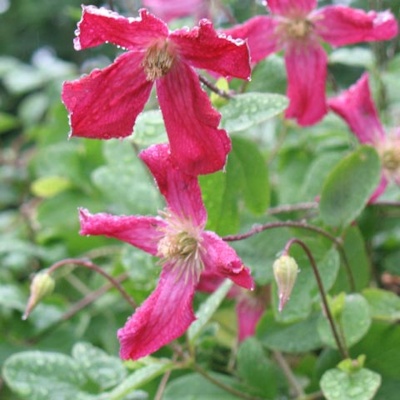 C. 'Brocade' showing some mildew on the stem

Mr Fretwell chose not to disclose any of the parentage details of C. 'Brocade'. I respect him for this. I respect him even more as a breeder of many fabulous clematis cultivars, C. 'Brocade' has now moved much higher on his list. 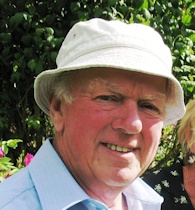