Clematis of the Month for January 2015 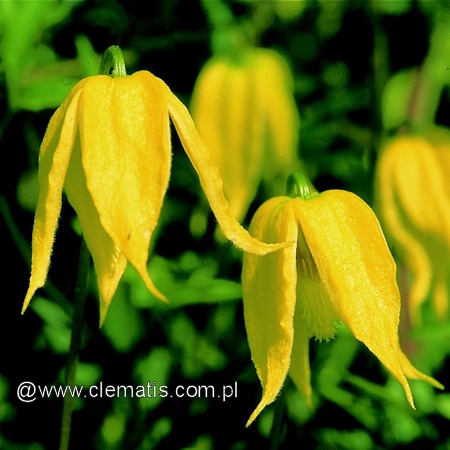 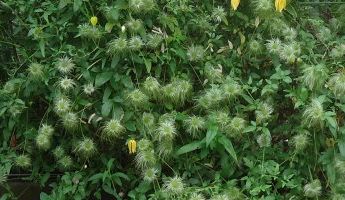 I like to try and choose a clematis which is either flowering in or has some connection with the month that we feature it.

The Clematis of the Month for January is a clematis which flowers in late summer but at this time of year has fabulous seed heads (see picture to your right) so provides interest, if not all the year round, for more than just late summer.

In fact I have cheated a little with the picture to your right showing the seed heads. It was actually taken in summer, but it still demonstrates how the plant can be covered in fluffy seedhead "balls". And in winter they are even whiter and fluffier, especially in sunlight, and will continue to decorate the garden until they are removed.

Autumn and winter are also that times of the year when, if you are lucky to live in an area where Clematis vitalba (commonly known as Old Man's Beard) grows wild, you will see the fluffy seed heads of this clematis in the hedgerows.

C. 'Aureolin' has featured on our Recommended Clematis list for a number of years and for some time I have wanted to complete write ups of all the cultivars that feature here. However I have never grown C. 'Aureolin' myself, as I have always thought of it as a plant for covering large areas. I have a small garden so I prefer to restrict myself to smaller plants of the same Clematis group, the 'Tangutica' Group.

I was therefore delighted when Wim Snoeijer, one of the most knowledgeable Clematarians from the Netherlands, said that he grew it in his garden and could let me have some pictures of it. Wim grows C. 'Aureolin' with other clematis so not only do the flowers intermingle pleasantly but the other clematis flowers are presented by the foliage and seed heads of C. 'Aureolin'. C. 'Aureolin' is also happy to scramble low down and fill in any spaces below the level at which the other clematis flower. This is an excellent way to grow this plant and is described on the web site set up by Szczepan Marczyński, www.clematis.com.pl, who provided the close up photo above. He comments: "Excellent for low walls, fences and wire meshes. May be used as ground cover." 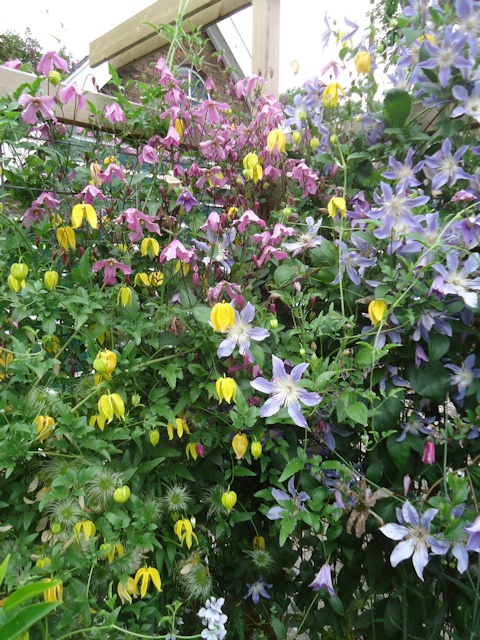 Whilst researching this article, I have been surprised by the lack of detailed description and the confusion of information on this excellent plant.

There are a large number of clematis within the Tangutica Group, for example C. 'Bill MacKenzie' AGM and C. 'Lambton Park' AGM, where the flowers are all very similar. The descriptions of the plants in my clematis reference books all appear to be very similar: they are all said to grow to the same height of 4 to 5 metres (12 to 15 ft), have roughly the same sized flower, 4-5 cm by 2 cm (2" by 1") and flower at the same time. Most clematis reference books do not have a detailed description of C. 'Aureolin' but just refer to the plant as another 'Tangutica' type and that they are all the same. Even the usually excellent Clematis reference book, International Clematis Register and Checklist 2002 has a sketchy description of C. 'Aureolin'.

I have noticed that a number of web sites (for example www.clematisinfo.nl, www.clematis.com.pl, www.joycreek.com) describe C. 'Auroelin' as being shorter than the 4 to 5 meters mentioned above and specify the height as more like 2 to 3 metres (6 to 9 ft). I wonder if the descriptions quoted elsewhere are based on the premise that "it's the same as other Tanguticas" rather than a knowledge of the plant. Certainly if C. 'Aureolin' is a slightly smaller plant than C. 'Bill MacKenzie' AGM and C. 'Lambton Park' AGM then it does deserve to be recommended for medium sized gardens.

C. 'Aureolin' was bred by Boskoop Research Station, the Netherlands in 1979 and was awarded an Award of Garden Merit (AGM) by the RHS in 1993. Unfortunately this AGM was rescinded after the RHS did a Trial of Yellow-flowered Clematis from 1998 to 2001. C. 'Bill MacKenzie' AGM had is AGM reconfirmed and C. 'Lambton Park' AGM gained an AGM at this time.

The question has been raised by Wim Snoeijer as to whether C. 'Aureolin' has become confused over time with C. 'Lambton Park' and there is now very little difference between the plants. This question arose during the International Clematis Society visit to Germany in 2013. We saw two fantastic plants, one of each, growing on different sides of a house and someone said - but are they the same plants? Click here for a link to the photos of the two plants.

So in conclusion, if you are looking for a later-flowering yellow clematis with lovely seed heads to last over winter and your space is limited to 2 to 3 meters then C. 'Aureolin' should be considered - but buy it from a Clematis Nursery where it has this height description or where you have spoken to the Proprietor. It may be that they think it grows smaller but feel that they have to say 4 to 5 metres 'as everyone else does'!

Although I started this article by mentioning the seed heads of C. 'Aureolin' being a delight in winter, now is actually the time to prune them off. In my small garden in England the seeds heads on similar, smaller Tangutica Group cultivars such as C. 'Helios' have stayed looking good up to and over Christmas but are now starting to look a bit tired. In a few weeks they will probably be damaged by winds so while I have the time I am pruning the plant back to about 0.5 metre (2 ft approx.) above the ground.

In the meantime I leave you with another photo of 'Aureolin' in summer with thanks to Wim Snoeijer. 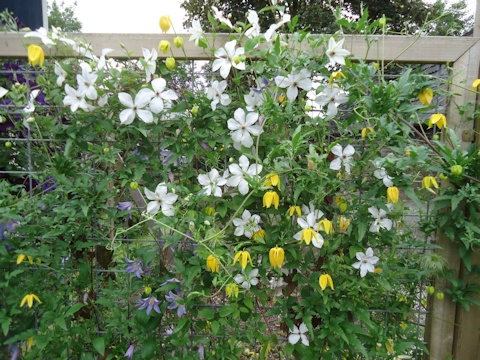 My thanks to Szczepan Marczyński of Poland for the first picture and Wim Snoeijer of the Netherlands for all the others.