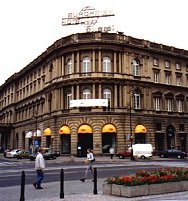 The International Clematis Society meeting in 2002 was set in Poland, from 23rd June to 1st July. This is the first of three informal reports on this trip. However rather than write a chronological diary, I will select three or four different events or points of interest for each report, to provide wide coverage and variety.

Poland 2002 started on Sunday 23rd June 2002 in Warsaw, at the Europjski Hotel where we were greeted in our rooms by a beautiful clematis arrangement, courtesy of Szczepan Marczynski's nursery. The Europjski is a grand, old-style hotel in the heart of Warsaw, only 10 minutes walk from the old town and market square, where a number of us ventured for dinner that evening. The local speciality, roast duck with apples, is highly recommended, as is Polish beer. 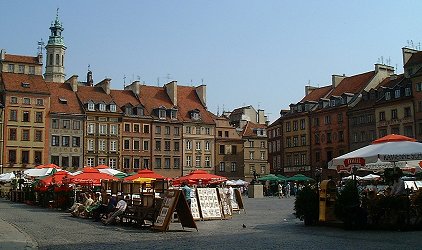 By the end of World War II, over 95% of the old town centre of Warsaw had been completely destroyed, all that was left were piles of bricks and rubble. Over the next 50 years or so, the town you see today was totally rebuilt, restored to it's former glory of the 17th and 18th century in a project which has gained it a place on the UNESCO World Cultural Heritage list.

The old town square is the centre of the old town and said to be the loveliest square in Warsaw. Many of the buildings around its perimeter are restaurants and their tables, laid out on the flagstones, provide opportunities for al fresco eating. In the small streets that radiate from the square, Polish amber is very evident as a favourite souvenir, available in all manner of articles from bracelets, necklaces, rings, sculptures and many more. Quite a few attendees decided to remember their visit by buying some. 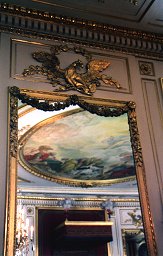 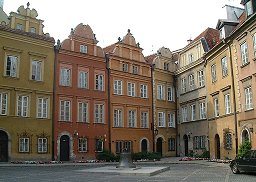 Just to one side of the old town centre is the Royal Palace, once again totally reconstructed from a pile of stones and rubble. Inside the very ornate rooms, one can see evidence of the use of the small fragments of the original decoration that were found in the rubble. Most of the gilt decoration, of which there is a lot, is very bright and shiny, but here and there were small pieces with a slightly duller look. These were original pieces, carefully retrieved and used in the reconstruction.

The meeting was in two parts, the initial few days for seeing just a few of the sights of interest in Poland, the second part comprising the conference, Constitutional General Meeting, some visits to small private gardens and a meeting with Brother Stefan Franczak in his garden. By organizing the programme in this way a number of members who, for various reasons find it difficult to take one week of leave at this time of the year were able to join us for the second part.

Monday morning and 33 members, plus Szczepan Marczynski and Ewa Zdzistaw, our Orbis guide, set off by coach for Zakopane and the Tatra mountains on the southern border of Poland, some 400 kilometres from Warsaw. En route we stopped at Wieliczka for lunch and a visit to the 700 year old Salt mine a UNESCO World Heritage site, but I'll leave that for another report. What I'll cover this time is our walk the next day in the Tatra mountains, searching for Clematis alpina growing in the wild. 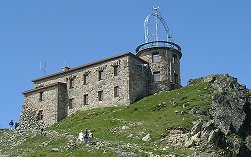 After a short coach ride around Zakopane to see some of the impressive wooden houses we disembarked at the bottom station of the cable car that would take us to the top of Mount Kasprowy Wierch, nearly 2000 metres high. Views from the cable car were quite spectacular, helped by the fine weather and clear air. From the top cable car station (there was a middle station where you must change cars) it is a short walk to the start of the downward trail that was to take us past sites where, in previous years, Szczepan Marczynski had discovered Clematis alpina growing in the wild.

We had the services of a mountain guide with us, not totally necessary since the path is quite well marked but quite reassuring for some and, as we found a little later, very useful.

We set off down a fairly comfortable slope but quite quickly this turned into a rough uneven path with some quite steep steps cut into it. Not true mountain trekking, this was certainly no morning "stroll". But the views were wonderful, the sir clear and the weather fine but not too hot. 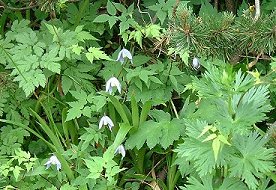 About an hour and a half later and we reached the halfway stage, a mountain hotel and restaurant where we enjoyed a rest and ate our packed lunch. Some members of the group were finding the trail a little harder than expected so it was decided to break into two groups. Szczepan led one group down the steeper path past the place where he had previously found clematis whilst our guide took the second party down a slightly easier path. In the end we both found clematis, so no one was disappointed.

Following Szczepan, the path did indeed get steeper and more punishing. There were going to be some stiff limbs next day. Then as we turned a corner someone spotted clematis, no flowers but unmistakable leaves and a few seedheads. Szczepan had been concerned that the season was early and this could mean we'd be too late for any flowers, but within another few minutes we came across our Clematis alpina. About 6 flowers remained but they were in good condition, a delicate light blue, growing through the native ground covering geraniums and up into the fir trees. 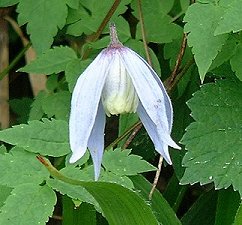 That evening we enjoyed a folk supper and entertainment, with music, dancing and the infamous "Hunters Tea", a warming, alcoholic punch that went down very well with some of us. But how we managed the "invitation dance", I don't know. By the next morning even the fittest amongst us admitted to having aching legs. But it was worth it.

Within the second part of the programme were visits to two private gardens. 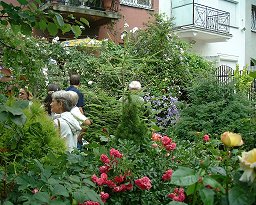 The garden of Józef Pasierb lies in the suburbs of Warsaw. I think the neighbours must have had a shock seeing one large and one small coach park by the roadside and 46 people cross the road and disappear into this small town garden. But what a revelation! 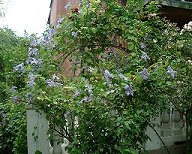 The garden was packed with plants, clematis, fruiting trees (including wonderful cherries), fir trees and many, many others. From a vantage point on the steps leading up to the house one could get an overview of the planting, as well as the congestion a coach, full of interested gardeners, brought to this quiet corner of Warsaw.

The second private garden was owned by Jolanta Jezierska, a landscape gardener. In fact we got two garden visits here as we were also invited into the next door garden, owned by her mother-in-law. 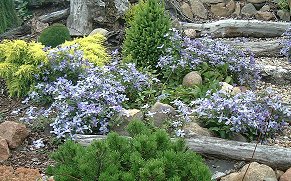 The garden, immaculately kept and presented, is obviously used as an advert for their landscaping skills and contained many very interesting ways of growing clematis in garden situations. They used clematis in conjunction with many other plants and structures. One particularly imaginative feature was C. 'Arabella', planted beside steps leading to a summer house on a hilltop, a vantage point from where you could survey the whole garden. 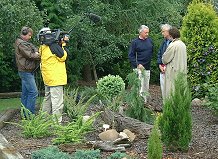 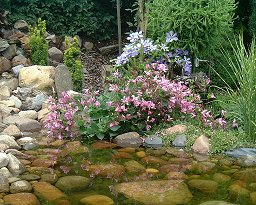 The other thing that struck me with this garden was how, as you wandered around it, there was always another unexpected treasure around the next corner. You had to walk around to realize just how much there was. But we were not alone in this garden. The local TV station had been with us for most of the day and took the opportunity to interview Szczepan Marczynski and Raymond Evison on the merits of clematis as a garden plant. I understand the International Clematis Society also got a mention! I wonder what the Polish TV viewers thought of it?

The garden next door, belonging to the mother-in-law of Jolanta, was perhaps a little more conventional but none the less beautiful. Very long, it was organized into a number of sections, each with a different theme, and it was immaculate. Not a leaf out of place, not a weed to be seen. Many thanks to Jolanta and her family and friends for making us so welcome and presenting their gardens so beautifully.

Follow this link for the second report, covering the Wieliczka Salt Mine and our meeting with Brother Stefan Franczak, amongst other things. This month I leave you with a shot of our Sunday lunch at the Clematis Nursery of Szczepan Marczynski and Wladyslaw Piotrowski in Pruszków and provided by them. A wonderful array of local Polish food, including some made by Szczepan's wife, Barbara and their friends.