This is the third and final of my reports on our visit and Constitutional General Meeting in Poland in June 2002. Follow this link to go back to my first report or this link for my second. 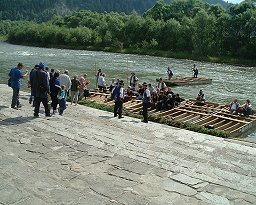 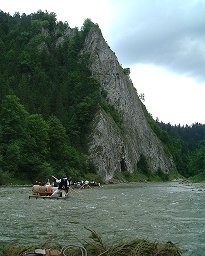 After the exercise of our walk down Mount Kasprowy Wierch in the Tatra mountains, the following day promised to provide welcome relaxation as we boarded our rafts at Kroscienko for a journey down the Dunajec River. With the sun shining and a light breeze, we pushed out into the current and were on our way. 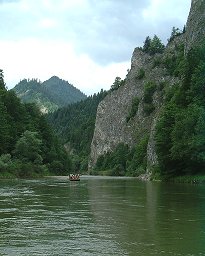 Each raft comprised five narrow canoe-like hulls, roped together to form a flexible structure. With crew at front and rear, steering by use of long poles, we drifted through beautiful scenery at a gentle pace. This stretch of the river runs through the Dunajec gorge, with steep rock faces each side, and also along the Polish/Slovak border. There were also Slovak rafts on the river, one can tell who's who by the colour of the highly embroidered waistcoats that each crew member wore, our guides were blue whilst the Slovak crew were black. One detected a degree of friendly rivalry between the nations, our Polish vessel was definitely superior! It was a relaxing and calming way to spend a morning, especially for those of us with aching limbs and feet from yesterdays "stroll" down the mountain. We were very thankful of the good weather, it would not have been quite so much fun in the wet!

Our journey back to Warsaw was broken with an overnight stop in Kraków, followed by sightseeing the next morning. 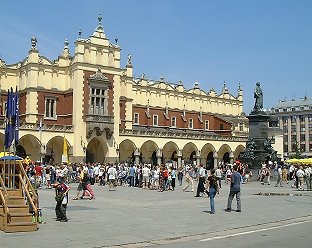 Kraków was once the royal capital of Poland and, unlike Warsaw, the historic buildings sustained little damage during WW2. It is a centre of art and culture and even now has relatively few skyscrapers to overshadow the many church spires. 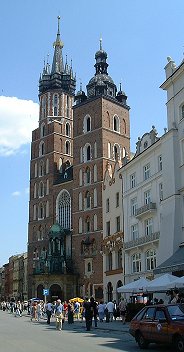 At the heart of the city is Rynek Glówny, Main Market Square, the largest medieval market square in Poland and possibly Europe. There are always many people in the square, strolling, shopping, or in one of the many pavement cafes sipping coffee and watching the world go by.

The square is dominated by the Cloth Hall. Originally for the cloth trade, it now houses souvenir stalls.

The square is overlooked by the church of St Mary. A church has stood on this site since the 13th century, though the present one dates from a little later and has had many additions throughout the ages. Whilst the interior is well worth a visit, for many the fascination lies outside, looking up to the top of the higher of the two towers where, on the hour every hour, a trumpeter plays a hejnal or warning signal to the four directions from windows in the tower. The last call stops short, legend has it that in the time of the Tatar invasions, the watchman was in mid call when an arrow pierced his throat. In honour of that watchman, all subsequent calls have never been completed. 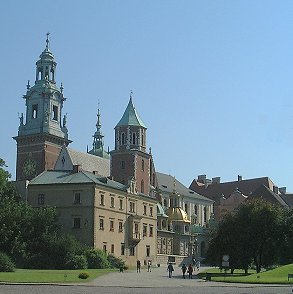 The Wawel, perched high on a hill overlooking the city, was the seat of the Polish kings for over 500 years. It comprises a number of imposing buildings, including the cathedral and castle, together with a large open area showing the foundations of previous buildings. It's a popular tourist attraction so it can get very crowded at times, though we were quite lucky, it wasn't too bad when we visited. 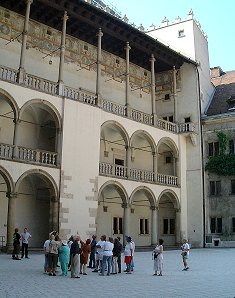 Our guided tour took us into the cathedral, with it's many crypts, chapels and alterpieces. The coronations of all the kings of Poland took place here, as did most of their funerals, and there are many famous Polish historic people lying within its four walls. 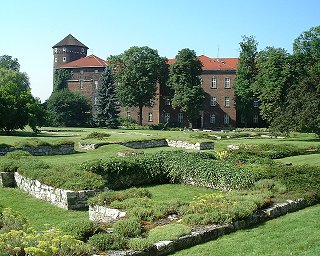 The other key building in the Wawel is the castle. The current structure dates from around the 16th century though it has been much altered and extended through the ages. Inside many of the rooms have been restored to their renaissance glory and it also houses a fine collection of tapestries.

Our visit to Krakow concluded with lunch of traditional Polish cooking in the Karczma Stara Chata restaurant, just off the square. 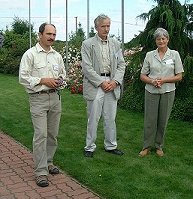 Given that the conference, with all the associated visits, had been organized by Szczepan Marczynski, it was fitting that our last event, on the final day, was lunch at his nursery followed by a tour of the nursery facilities and the display garden. Located a short drive outside of Warsaw in Pruszków, the nursery is run by Szczepan Marczynski, shown here with his wife, Barbara, and his partner, Wladyslaw Piotrowski.

A wholesale nursery, they supply retail outlets in Poland and many other countries. Szczepan has his own breeding and selection programme and has bred a number of new clematis. Three that are shortly to be introduced to the market are shown below, C. 'Barbara', C. 'Julka' and C. 'Hania'.

After providing a wonderful lunch of Polish cuisine, (see photo at the end of my first report), including food prepared and served by friends and family, Szczepan gave us a comprehensive tour of the nursery. Walking around the different areas one cannot but be impressed by the size, tidiness and cleanliness. In the large outdoors stock area towards the back of the nursery, there are row upon row of pots, all beautifully in straight lines and not a blade of grass between them.

The climate in this part of Poland can change very quickly and so computer controlled environmental monitoring equipment has been installed in the polytunnels to open or shut ventilation vents, start or stop misting systems and operate other equipment to maintain ideal growing conditions for the young plants. 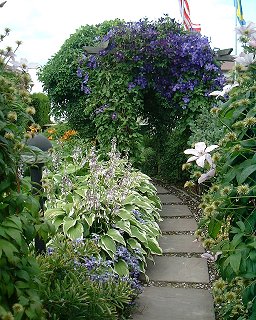 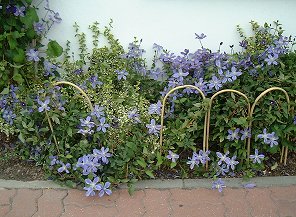 Planted all around the working nursery are fine specimen clematis, showing off the results of the hard work that goes on there. But even better examples are to be seen in the display garden Here clematis have been planted in amongst other plants as one might at home, in very natural settings and in combination with other plants. I particularly liked the C. 'Arabella' with the variegated foliage of the hostas. 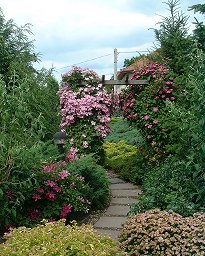 All around the garden the attention to detail was very noticeable. The planting looked as though it had been there for ever, a sure sign that someone has spent much time and effort thinking through the planting scheme, the combination of colours, sizes, flowering periods. 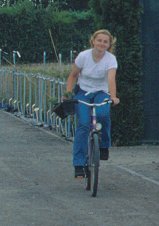 Although a wholesale nursery, attendees were able to purchase plants. Particularly useful for members from countries which don't have many specialist clematis nurseries, it also gave all of us the opportunity to acquire some of the rarer East European cultivars, including a number bred by Brother Stefan Franczak. Despite being Sunday, all the nursery staff were on hand to process our orders and fetch the clematis that we wanted, even if they were on the opposite side of the nursery. We thank them all for their hard work that afternoon.

Our week in Poland went very quickly, but we all left with fond memories of the country and the friendly people who welcomed us and showed us just a little of their beautiful country. And most of us left with a few clematis as well! 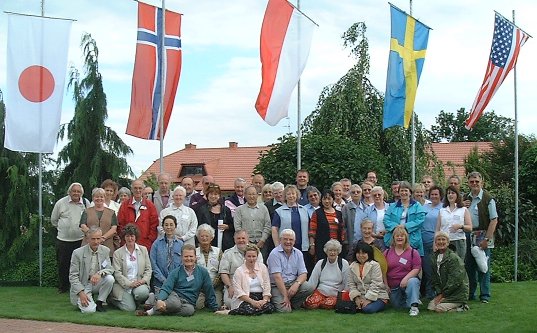