This is the second of my reports on our visit and Constitutional General Meeting in Poland in June 2002. Follow this link to go back to my first report or this link to go forward to my third.

As we made our way to the Tatra mountains on the southern border of Poland, we stopped to visit one of the most famous Polish tourist sights, the 700-year-old UNESCO World Heritage listed Salt Mine at Wieliczka. 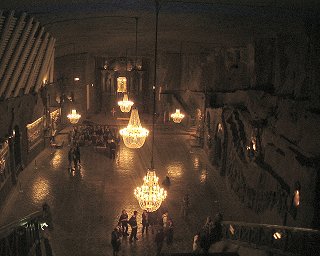 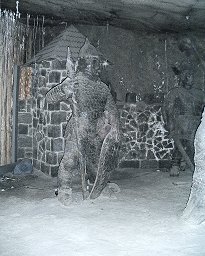 The unique feature of Wieliczka are the salt carvings. Chambers, statues, staircases, even chandeliers have all been carved from the salt by the workers. It's very strange to walk into a chamber, carved out of solid salt rock, to be faced with a church, complete with alter, salt cross, and all the decoration one would normally get in a church above ground. But possibly the single most impressive feature was the grand hall, a huge room with carved frescoes on the walls and chandeliers hanging from the high roof.

Should you visit, don't forget your address book, as the mine also contains the worlds deepest post office!

The second part of the meeting started on Friday morning at the Warsaw Agricultural University where we used one of their lecture rooms for a morning of presentations. The atmosphere was set immediately we walked into the room as we were greeted by three wonderful flower displays of freshly picked and arranged clematis, all the work of Dorota Piotrowska, the wife of Wladyslaw Piotrowski, the partner to Szczepan Marczynski in his nursery at Pruszków.

We started with a presentation by Klaus Körber on "The Genealogy of Selected Clematis Species". Klaus had drawn up a very impressive chart demonstrating the origins, in genealogical terms, of many well known clematis. When shown in this way it is clear to see where certain characteristics in cultivars have come from. This chart is only the start and there is much more work that could be done in this area, given time! I hope to be able to provide this chart on this site at some stage. 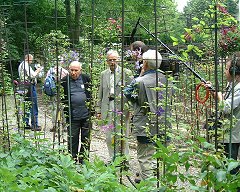 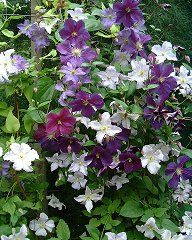 The name of Brother Stefan Franczak is known to most people in the clematis world, but I suspect few have meet him, or seen the modest garden where he has, over the years, bred so many famous clematis and indeed continues to do so.

The monastery where he lives is, in fact, a grey square concrete building in the suburbs of Warsaw. Who would know that behind this lies the birthplace of so many world acclaimed cultivars. The picture to the left shows a display in the garden of just a few, including Blekitny Aniol, Star of India, and Silia. 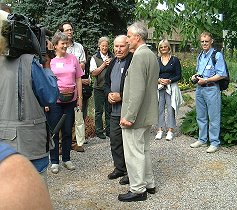 We were accompanied on our visit by a Polish television crew, see picture above right. They seemed very interested that so many people, from all over the world, should have come to Warsaw because of their love of one plant. 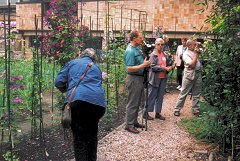 With so many people, we wandered freely around the gardens, though Brother Stefan was always on hand to answers questions, helped in translation by Szczepan Marczynski. Whilst the weather this year had brought many into flower earlier than usual, there were still quite a lot of blooms to be admired, and photographed. And you might be interested to note the supports which Brother Stefan uses for most of his clematis - concrete reinforcing bars with short horizontal cross pieces. They may not be the most elegant of supports but they work extremely well. The twist of the steel vertical bar with its rough surface and the occasional cross member give clematis plenty to cling to and surely provide a very economic solution. 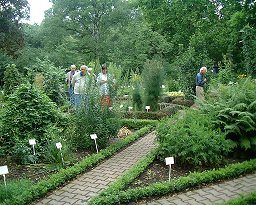 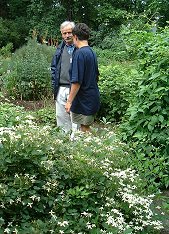 My first report described our tour of Warsaw old town centre, but I'd also like to mention a couple of other places we visited.

We only had a short time to visit the Botanic Gardens of Warsaw University so we could only se and appreciate a small part of the over 5 hectares of planting. It was first planted in 1818. By 1824 in contained 11000 species.

After a long period of misgovernment and neglect, restoration of the garden was started in 1916. Work progressed very well until interrupted by World War II, but was recommenced and it is now flourishing again.

Time allowed us only a small glimpse of the gardens but enough for many to wish to return on any future visit to Warsaw. 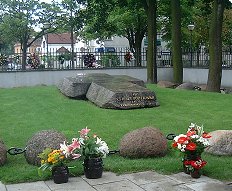 Poland and the Polish people have had a most turbulent history. Strategically placed within historically powerful countries within Europe, Poland has often been subjected to the imposed rule of other nations. Poland broke free of Soviet rule in 1989, the first of a number of formerly Soviet controlled countries that are now enjoying self determination. Whilst there are still many challenges for Poland, now its destiny is back in the hands of the Polish people.

To many of us, just how recent all these events were was brought home when we visited the church of Saint Stanislaw Kostka, dedicated to the memory of the pro-Solidarity priest, Jerzy Popieluszko. He was brutally murdered by Soviet security police in October 1984.

My final event for this report was a very special visit to the home of the Polish composer and conductor, Krzysztof Penderecki, located at Luslawice near Zakliczyn. Special - it is normally not open to the general public so we were honoured to be given a guided tour of both house and gardens. Krzysztof Penderecki was not at home, in fact his work means he barely spends a couple of months here each year. 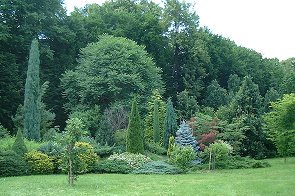 The house is beautifully decorated and furnished, however it has a homely atmosphere of somewhere in which one could easily relax. In particular it has some fine examples of tiles stoves in a number of the rooms. 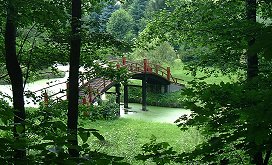 The gardens divide into a number of discrete areas, including an Italian garden, an arboretum and an oriental garden still in the making. Not many clematis, though we did spot some waiting to be planted, but many other interesting plants. 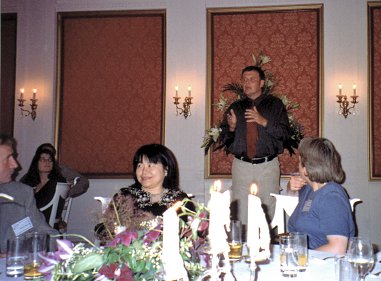 This month I'll leave you on a culinary note. On Thursday evening we walked across the road to the Hotel Bristol for a Conference Dinner. In a very grand dining room surrounded by clematis floral displays, we eat a beautifully prepared and served dinner. The menu, prepared specially for the International Clematis Society, comprised:-

Fryderyk Chopin was, as I'm sure you all know, Polish and after this feast we went to the Palace on the Water in Lazienki Park where we were entertained with a private Chopin piano recital by the international pianist, Joanna Maria Lawrynowicz.
Beautiful music in a very fitting venue!

Interested in reading more - follow this link for my third and final report, covering rafting down the Dunajec river, our vist to Kraków and the nursery of Szczepan Marczynski.