The weather could have been better, but the hospitality and programme for Sweden 2007 could not be faulted. Bengt and Karin Sundström had, with help from a number of friends, put together a set of garden visits and other events with something to please everyone. And the organization was very well thought out, with a timetable that ran like clockwork and the provision of a rucksack and umbrella for every attendee - very useful too as you will soon hear.

2007 celebrated 300 years of Carl von Linné, famous for his botanic classification, and 100 years of Magnus Johnson, world renown clematis expert, and the programme contained tributes to both. It also contained a further interest in that it took us across Sweden, from our start in Malmö in the west all the way across to Stockholm on the eastern side.

More than 50 people from 12 countries attended. In this, the first of my informal reports, I will cover the first two days of visits, on the western side of Sweden. 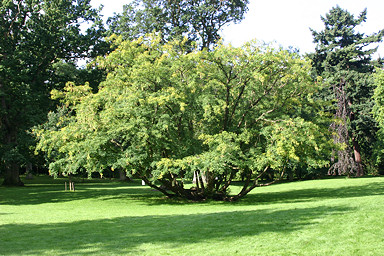 After meeting and dinner in the Quality Hotel Konserthuset, Malmö, we set off on Sunday for Alnarp and the SLU (Sveriges lantbruksuniversitet / Swedish University of Agricultural Sciences). This is one of the foremost arboretums in Sweden, with trees dating back many decades, some more than a century. We were given a guided tour to see some of the more important specimens. It was during this stroll that we had our first - though not the last - occasion to be thankful for our umbrellas, generously donated by Telge AB. 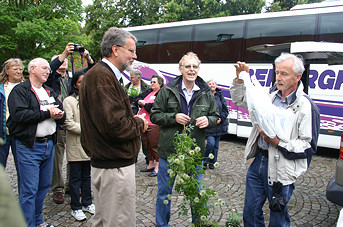 At the end it had been hoped that we would plant Clematis 'C.G. Dahl', a Magnus Johnson cultivar named in honour of a former SLU leader, but the ground was so wet that we had to be content just to present it to SLU for them to plant later. 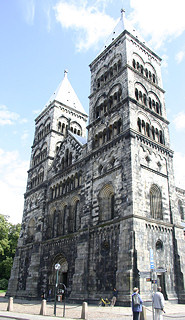 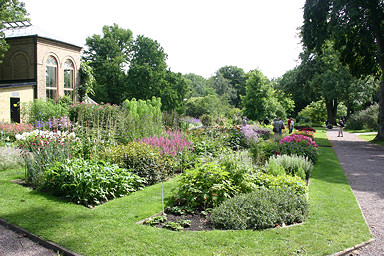 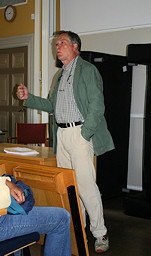 However the main reason for the visit to Lund for a lecture by Professor Gunnar Broberg on Carl von Linné. Professor Broberg is a leading expert on Linné and author of a thesis about him. We had all received a copy of a booklet by him in our attendee packs. Personally, I found his lecture very interesting. Professor Broberg's style was very informal, even humorous at times, and he spoke with the ease and grace of someone who is very familiar with his subject. A most entertaining session.

There was a little time allowed after the lecture for a stroll around the Lund Botanic Gardens, most welcome since the weather had now brightened up considerably. I think many people were pleasantly surprised by the variety of plants this garden contained and we were all impressed by the immaculate presentation. 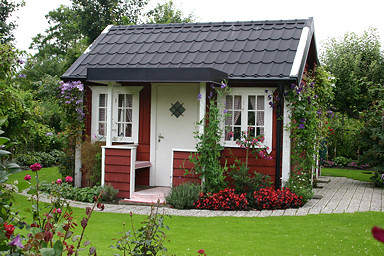 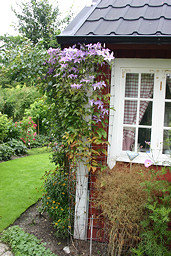 Our final visit of this busy first day was to the private allotment garden of Jens Larsson. Our first true clematis garden and it was a gem. In fact, it was two plots back-to-back, one belonging to Jens, the other to his daughter, but they were both full of beautiful clematis. We swarmed over and around the garden like bees around a honey pot.

We have seen before how allotment gardens are often created as a plant oasis for people who live in apartments without their own attached gardens. These were wonderful examples of how you can take a simple space and make a hoticultural gem - a place of calm and tranquility, of colour and form. Even with the inclement weather of our visit, we could visualize sitting outside of the house, in the sunshine, enjoying the view around the plot. 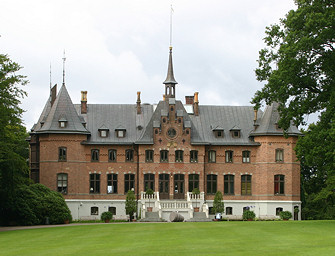 Day two started at Sofiero Castle, Helsingborg, with its two English style gardens and their Magnus Johnson Clematis Garden. The imposing fortified house made a perfect backdrop for a team photo (see end of this report) and just as well we took this at the beginning of the visit, before the rain came. But that didn't stop us having a good look around. 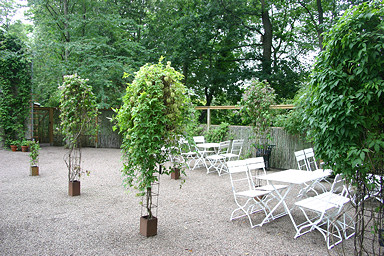 The Magnus Johnson Clematis Garden contains mainly atragenes so there were only a few flowers out, but one could imagine what it must have been like earlier in the year. It's in a lovely position, on the top of a small hill with a small glasshouse nearby from where you got a good view out to sea - very peaceful and tranquil. 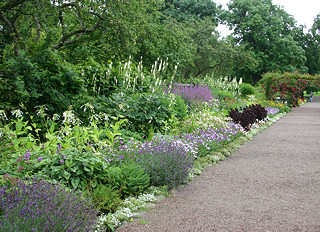 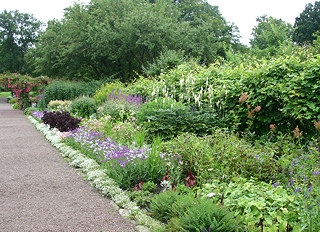 The grounds of Sofiero Castle are very extensive, with walks down to the coast and through woodland as well as a number of separate gardens, including the English borders below, and in spite of the damp weather, many of us didn't visit the house and the Linné exhibition before it was time to move on. Certainly a place to revisit when next in the area. 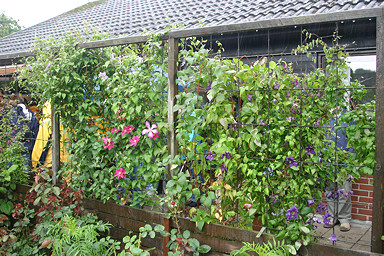 The light rain carried on for the first half of the afternoon but that didn't dampen our enthusiasm for the private garden of Sixten and Ingar Widberg. Members of the Society and known to many of us, Sixten has been growing clematis for a long time. He also breeds and selects clematis and has quite a few to his name, including C. viticella 'Hanna'. 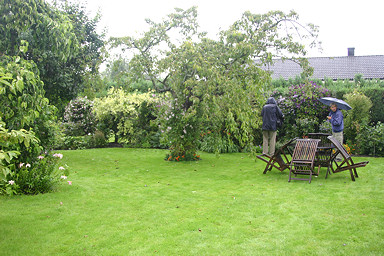 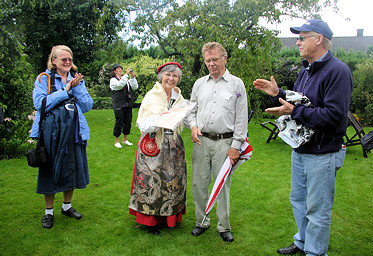 I'm sure different people were struck by different aspects of this garden, but the thing that stood out for me was his wonderful eye for colour and form when growing clematis with other plants - sometimes other clematis, sometimes other plants entirely. For sure, his plants were very healthy, his garden beautifully presented, but for me it was his imagination and vision to create plant combinations that was quite astounding. 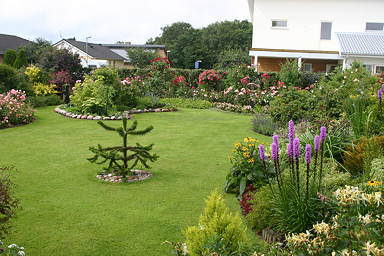 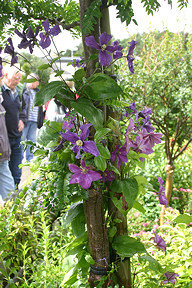 The rain had stopped and the sun was shining for our last garden of this second day, the private garden of Ingvar Green. A fairly young clematis garden, Ingvar had a very impressive range of clematis, both large flowered hybrids and small species. 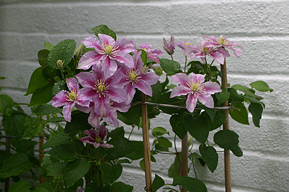 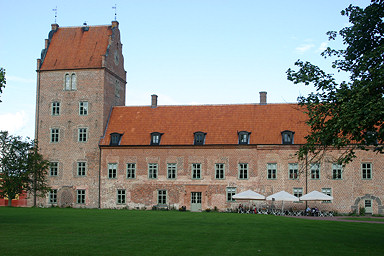 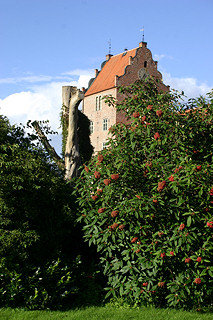 Tonight was quite special for us as we stayed at Bäckaskog Castle, a most impressive building which started life in the 13th century as a monastery but has undergone many additions and changes through the ages. The grounds are quite spacious and it was nice to be able to wander around before we ate.

Our dinner was a delicious Swedish banquet, served in the vast banqueting hall. To entertain us, Kimmo Rumpunen (more of him in my next report), his wife and a friend played a number of period pieces both during and after dinner. The food, the music, the setting and the atmosphere were perfect for a most enjoyable and relaxing evening after a full and busy, but equally enjoyable day. 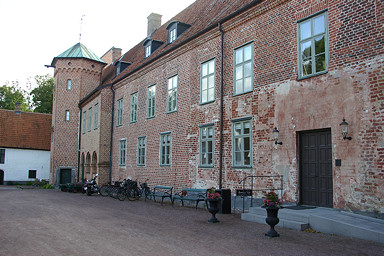 I finish this report with the group photo, taken in front of Sofiero Castle. The picture here is reduced in size and resolution for ease of display, but if you wish for a high resolution version, please click on the picture. The larger version will display in a separate window, from which you can print or save it. But beware, this high resolution version is just over 6.1Mbytes large. I strongly suggest you only do this is you have a high speed internet link (Broadband / ADSL)! 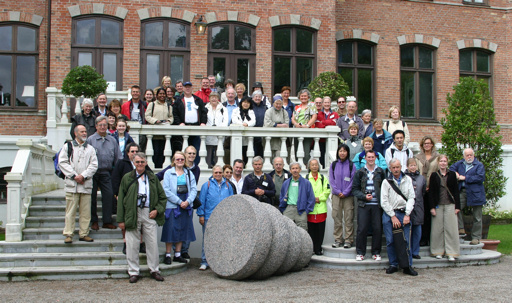