This is the second of my informal reports on Sweden 2007, our journey across Sweden to celebrate 100 years of Magnus Johnson, renowned clematarian and 300 years of Carl von Linné, famous for his botanic classification. If you wish to read the two other reports, you'll find them at Sweden 2007 - Part 1 and Sweden 2007 - Part 3. 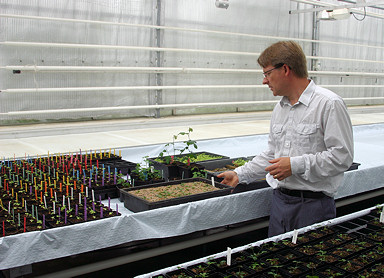 Having seen the musical side of Kimmo Rumpunen at the banquet at Bäckaskog the previous evening, we met the horticultural person the next day when we visited the research station at Balsgård the next day, home of the Magnus Johnson Clematis Collection.

The remit of the Research Station is the development of fruit, berries and woody ornamental plants, which include clematis. This is through an understanding of their genetics, through cultivation and by breeding programmes. Dr. Kimmo Rumpunen gave us a fascinating talk about the work of the Research Station before showing us around, and ensuring we saw their clematis breeding programme and some of the current results. 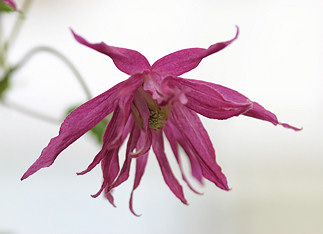 I found this red macropetala, I believe it had the designation CLE 0308-1, was quite stunning, but whether it is ever available commercially remains to be seen. Balsgård has an international reputation for its breeding programmes, selecting only the very best to go to market.

After touring the greenhouse clematis collection we went out into a part of the 70 hectares or this Research Station to look at some of the outdoor trials. We were also greeted by a large number of bags containing several plants each - a present for each of us from Balsgård. Included was one of Magnus Johnson's Clematis - Carmencita and Echinacea purpurea 'Magnus' (no connection to our Magnus!). A lovely gesture and one that will give us all permanent reminders of our visit for years to come. 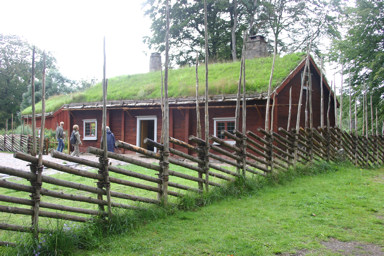 After a very nicely prepared buffet lunch, also provided by Balsgård, we headed for Råshult, the birth place of Linnæus. This may be a good opportunity to say something about his name. Most people are probably more familiar with the name of Carl Linnæus, which he was given at his baptism. His academic position in society was shown by use of the Latin ending. However in 1757 he was ennobled and after that date he took the name Carl von Linné. 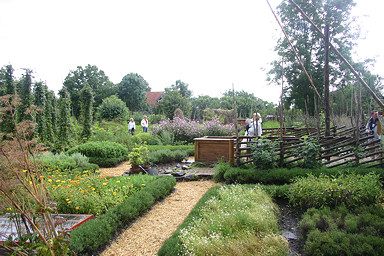 His father was vicar of Stenbrohult and lived in Råshult with his wife, 3 daughters and 2 sons. The house in which Carl Linnæus lived doesn't exist any more but the vicarage has been restored to its former glory, along with farm paddocks with their distinctive wooden fences and the vegetable garden with plants of the period. We were given a guided tour / talk about the place and the crops that are still being grown there, also how they were cultivated. 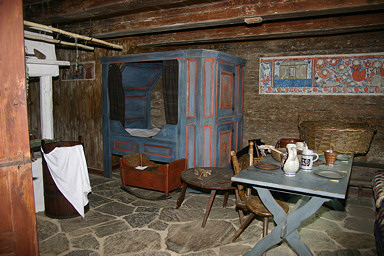 We should have gone for a walk through the surrounding woodland, where one can see evidence of former farming and cultivation, but for the ever darkening sky. Then the heavens opened and it rained and rained. We stayed outside for a while, sheltering underneath umbrellas, but when it got so hard that we could not hear our guide, we decided to forget the walk in the countryside and instead look around inside the vicarage.

This has been restored and furnished in the manner of the early 1700's, when Linnæus was born. One could see that life in those days was very hard, especially during the long winters - remember we are in Sweden and so there would have been snow for at least 3 months of the year, maybe more - as there was only one fire grate in the whole of the house. 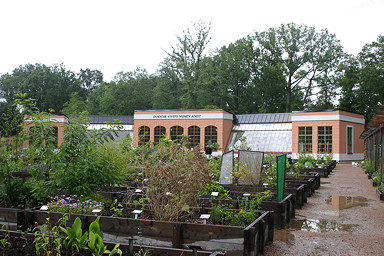 We continued the Linnæus theme of the afternoon as we moved on to Möckelsnäs Herrgård, a large stately home close to the birthplace of Linnæus. In 1675 the house and estate were bought by Germund Palm, later to be ennobled and be given the name Cederhielm, also to become county governor. Germund Palm appointed the father of Linnæus as vicar of the parish of Stenbrohult, and Carl and his father were frequent visitors to Möckelsnäs Herrgård. He encouraged Carl's interest in botany and medicine.

Möckelsnäs Herrgård is now a hotel and restaurant, and they served us excellent mid-afternoon tea and cakes. But we couldn't sit there all afternoon, for across the way from the house is an orangery and display garden, laid out according to Linnæus's Botanic categorization. This has been built especially for the 300 year anniversary of Linnæus and was only opened less than three months before our visit. Although the orangery is a very impressive building and the display garden a fascinating idea, I suggest it needs a year or two to establish itself to show itself in best light. 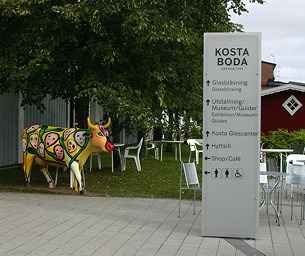 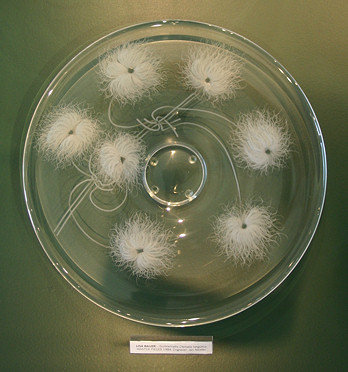 After an overnight stay in Växjö, we boarded the coach for a day travelling towards the Stockholm area, specifically to Södertälje, where Magnus Johnson had his nursery, Bengt and Karin Sundström now reside and of course the town after which Magnus Johnson named a viticella selection.

Although we had quite a long journey, there were a couple of breaks scheduled to give us a chance to get off the coach. The first was at Kosta Boda, the famous Swedish glass works. We were first shown around the museum containing both very old glass objects through to some of the most modern Swedish designed glass. We also saw some glass blowing, always fascinating, and had time to look around the shop.

It was in the museum that we had a great surprise as, in one of the exhibition rooms we found a beautifully engraved glass plate with a clematis design on it. The subject was Clematis tangutica seedheads, designed by Lisa Bauer and etched by Jan Neikter. The picture doesn't really do it justice as the fine detail was absolutely superb. It's amazing how clematis crop up when you least expect it. 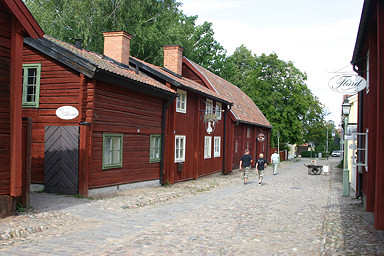 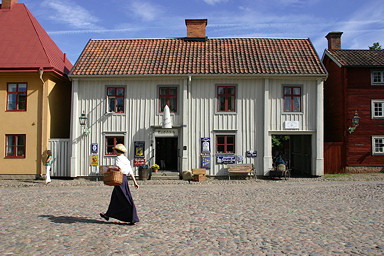 By the time we stopped for the second break in our journey to Södertälje, the skies had cleared and the sun was shining, perfect weather was a stroll around Old Linköping. This living museum of old Swedish life and culture stands where the old town used to be. Some of the buildings have always stood where they do today, others were carefully taken down, moved to their current location and reconstructed exactly as they had stood. The result is an authentic old Swedish town centre. Not only externally, though, as all the buildings are used, as shops, coffee houses, etc. Many are occupied by people continuing traditional Swedish crafts and occupations. There are even people strolling around in old costume, more than happy to be stopped and asked about the town and life in "the old days". 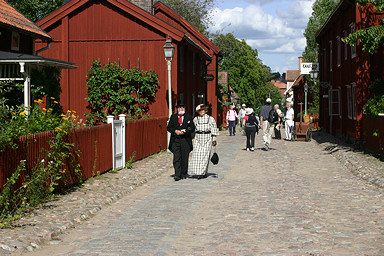 Personally I tend to be a little suspicious of reconstructions of past times, wondering whether they will be far too simple and only aimed at children, but in Old Linköping it is done superbly. The "inhabitants" are not just very friendly, they all seemed to be very knowledgeable about life and times and wanted to share their knowledge. We visited the old schoolhouse, just as it was shutting, but the lady insisted we come in. She then proceeded to give us a complete guided tour, explaining how people were taught, what they were taught, how in fact some of the brighter pupils then had to teach younger ones. We must have delayed her for quite some time but she didn't mind at all. 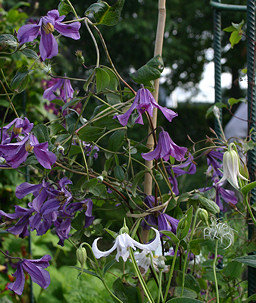 We did have great weather, which helps, but even so I'd recommend that anyone in this part of Sweden should visit here.

Eventually it was time to leave, but there was one more pleasant if unexpected stop for us before we were to reach our hotel in Södertälje. Quite suddenly our coach turned off the main road and within a few minutes we were driving slowly around a relatively modern housing estate. The coach parked by the side of the road and, to the surprise of one resident who was walking his dog, we all got off and headed towards the distant clematis that we could see flowering in the hedge of a garden - the garden of Werner Stastny. Werner lives close to Södertälje and, since we had time and the weather was good, we were treated to an unscheduled clematis stop. He had quite a number of clematis still in flower, including a particularly good example of what looked like C. 'Paul Farges' over the side wall of Werner's house, C. 'Alionushka', always a striking cultivar with it's pink and slightly twisted sepals, and this fine contrasting pair of cultivars, C. CHINOOCK™'Evipo013'(N) and C. GAZELLE™'Evipo014'(N). 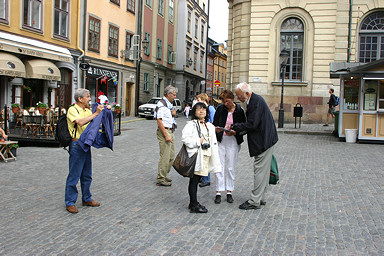 In any visit programme, it's often a good idea to include one easy and/or contrasting day and for us, that described Thursday. Being so close to Stockholm, and given the excellent public transport system in Sweden, we were all given train tickets to the city centre plus the option of joining three different tours by volunteers from our the Swedish clematis friends in and around Stockholm.

For those who, perhaps, had never visited Stockholm before, the obvious choice was the Wasa Museum. This contains the almost complete and intact wooden warship Wasa which sank on it's maiden voyage in Stockholm harbour in 1628. It lay in the mud for 333 years before being raised in 1961, and it was this fact which preserved the timbers to such an extent that it looks nearly as good as it would have done when new. It is one of the major tourist attractions of Stockholm and for very good reason. Standing close to it, the size of the vessel is breath-taking. That so complete a ship could still exist 379 years after it was launched is quite amazing. 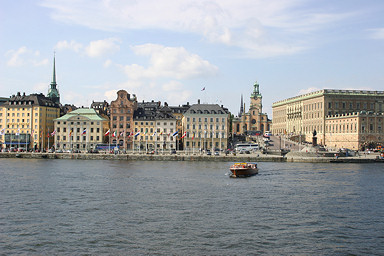 As an alternate for those wishing a slower pace, there was a visit to Drottningholm Palace and Park, the private home of the Swedish Royal Family. It can be reached from the city centre by a pleasant boat journey and, given the fine weather, this was quite tempting for a number of people in our group.

The third option, and the one Fiona and I joined, was a walking tour of the Gamla Stan (old town) by Ulf Svensson. And so we set off to be shown around this quaint and interesting city centre. Ulf seemed to have an almost encyclopedic knowledge of Stockholm and pointed out many things that would otherwise have gone unnoticed by us. And so we wandered around, visited a Shoe Exhibition in the Arms Museum, had lunch overlooking the harbour and found the "alternative" shopping centre of town. It was great fun and we thank Ulf for his time and energy. 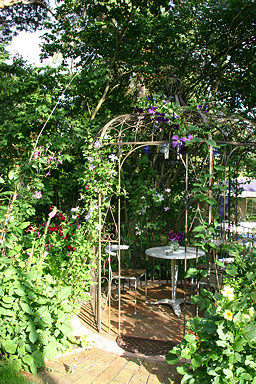 That evening we were all invited to the house and garden of Bengt and Karin Sundström for drinks and a buffet dinner. Catering for over 50 people is a significant task and so it was hardly surprising to find the whole of Bengt and Karin's family involved in the organization and running of the evening. Bengt and Karin now live in the house where Magnus Johnson used to live and have his nursery, so there was plenty of clematis around to interest us all, including this attractive arbour (see left) which was specially erected and planted up for our visit. 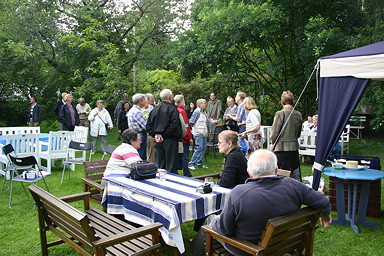 It came in very useful when a newspaper reporter and a photographer arrived. The visit of the International Clematis Society to Sweden and especially Södertälje was important news and they seemed very interested to know why we were so fascinated by this genus. To illustrate the article, which appeared in the local paper the next day, they took a photo of three of us sitting underneath this arbour, surrounded by clematis.

It was a great evening and a good opportunity to reflect on the visit and events of the past few days and look forward to the rest of the programme. And so I finish this, the second of my informal reports on Sweden 2007.