Clematis of the Month for August 2012 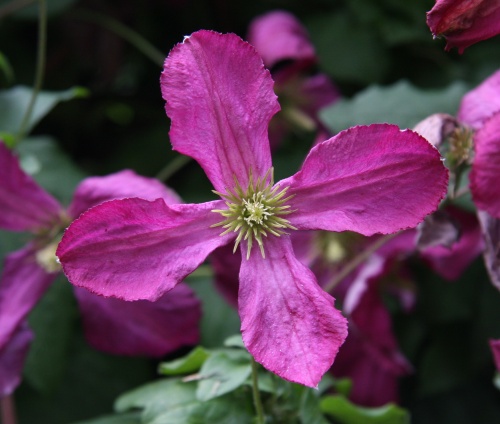 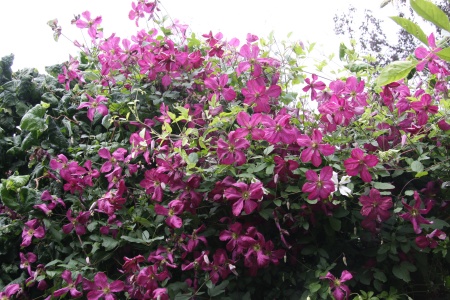 This is one of my favourite garden clematis. It grows up, through and over a small Corkscrew Hazel tree (Corylus avellana 'Contorta') and cascades magnificently downwards. The pointed buds hang downwards and then open and eventually turn outwards more than upwards. At this time of year it is fabulous; a real splash of colour.

C. 'Södertälje' is a late flowering type (one of the Viticella family) which is pruned every year. This makes it a great plant to grow with a plant that either needs pruning back every year (such as a rose) or a deciduous plant (such as Corylus avellana) so that the pruning of the clematis is done at the same time as the host or when the host plant has few leaves to get damaged. 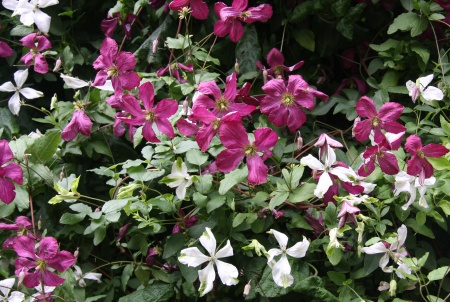 As you can see the flowers are a dark pinky red with a central green or yellow boss which are light enough to stand out rather than fade into the background. However growing a paler coloured clematis with C.'Södertälje' will help make the flowers more noticeable. For this I would recommend C. 'Alba Luxurians' (which is white and a stark contrast and is the combination that I grow, or C. 'Luxuriant Blue' which would give a softer contrast as it is more of a pale blue than white with blue tips to the flowers.

These three clematis above have a common trait in that some of the flowers have green tipped sepals. The amount of green varies in that C. 'Alba Luxurians' and C. 'Luxuriant Blue' always have more green tips than C. 'Södertälje'. All the plants tend to have the green tips early in the season but most of those early flowers on my C. 'Södertälje' have dropped off leaving more rounded whole red flowers whereas the flowers on C. 'Alba Luxurians' and C. 'Luxuriant Blue' still have green tips.

On their own I find that I find that I like the effect of green tipped sepals with the dark red flower of C. 'Södertälje' better than with the lighter colours. However, grown together they charmingly compliment each other having the same size and shape flowers and the same habitat.

C. 'Södertälje' is a seedling of C. viticella 'Grandiflora Sanguinea' raised by Magnus Johnson of Sweden in 1952. Magnus was born near the town of Södertälje to the south west of Stockholm and after working away in Göteburg and in Austria he came back to live in Södertälje where he had his plant nursery. It is fitting that he named this lovely clematis after the place where he lived. C. 'Södertälje' is celebrating its 60th anniversary this year and has justified being in cultivation for so long.

You may also be interested in another excellent clematis with a very similar coloured flower which is C. 'Carmencita' also bred by Magnus Johnson, also a seedling of C. viticella 'Grandiflora Sanguinea' and also introduced in 1952. However the flowers, although similar in colour, are very different with their rounded shape and dark central boss. I grow C. 'Carmencita' in my garden with C. 'Maria Cornelia' which is a white clematis with the same rounded flower shape as C. 'Carmencita' and dark central boss. These are two other clematis which compliment each other well.