Clematis of the Month for December 2015 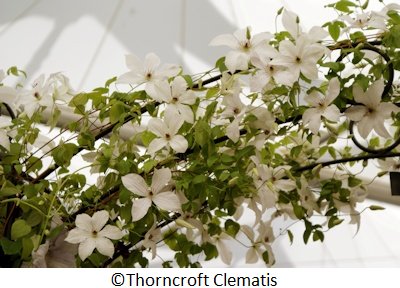 My thanks to Thorncroft Clematis and Wim Snoeijer for use of their photos, as indicated. The other two are ©Ken Woolfenden. 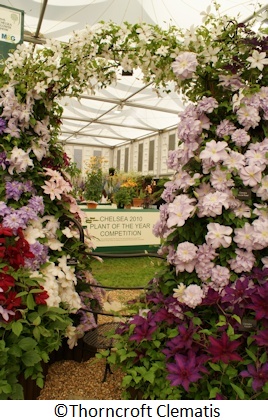 Although I like to feature seasonal clematis this month's Clematis of the Month is not in flower during December (in the Northern Hemisphere where I live!) but it is white which is a wintery colour and it is named for the father of the breeder so it seems a suitable clematis to feature in the month leading up to Christmas which is generally a family event. 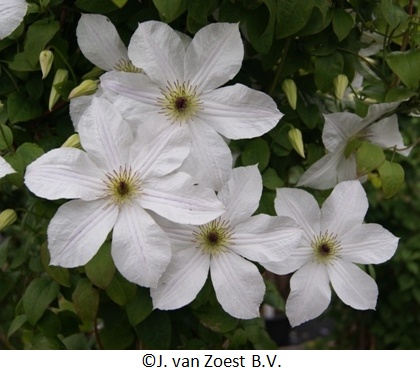 C. 'Zofofri' FOREVER FRIENDS is generally described as a late large-flowering clematis in the Jackmanii Group in pruning Group 3. If left unpruned the plant should flower in June and if pruned early in the year, with other Group 3 clematis, then the flowers will be later from July till September.

I see that Clematis on the Web says that one of the parents is C. 'Mrs George Jackman', an early large-flowered white clematis and the other is C. 'Walenburg', a late small-flowered clematis in the Viticella Group. As both of these clematis are on this Society's Clematis for Beginner's List two such good garden worthy parents should contribute to the success of the off-spring! 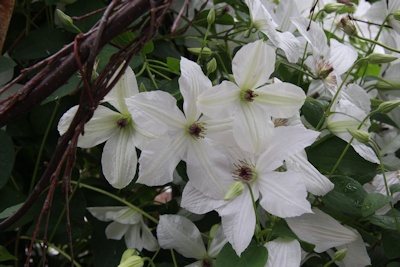 The flower generally has six sepals. They are pointed, slightly gappy and the flower is about 9 cm in diameter. The major difference between this clematis and other white clematis is the central boss of stamens which have some purple colouring giving the flower a small dark centre. The colour is a clear white and although I've seen it described with a touch of pink there can also be a touch of green, particularly along the ribs down the centre of the sepals when the flower is starting to open (see right). 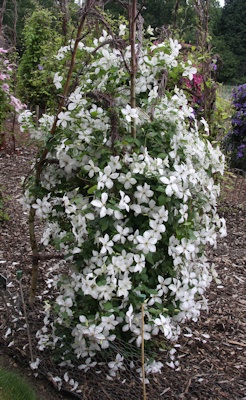 In 2014 the plant supports at Wisley Trial Grounds were posts with canes attached, so these structures were very tubular. I reported in the Society's Journal Clematis International 2015 that C. 'Zofofri' FOREVER FRIENDS had grown upwards very tidily and neatly, almost to the top of its support and was most similar to a Jackmanii variety.

In 2015 the plant supports at Wisley were less regimented being comprised of 3 stout branches tied together at the top with interwoven smaller twigs to give the clematis something to climb up. The result with a fully grown plant was very effective and allowed C. 'Zofofri' FOREVER FRIENDS to bulk out more as you can see.

I did buy a plant after our visit in 2014 and it flowered last year in my garden. Due to a busy year I did not notice that it had climbed to the top of a trellis and then it flowered where we could not see it easily. This year I shall be more watchful and encourage it to travel sideways and flower where I can see it.

For the Clematis Exhibition at the Boskoop Nursery Museum this year (2015) Wim Snoeijer conducted a survey of the best white, pink, blue etc. clematis for the garden and C. 'Zofofri' FOREVER FRIENDS was voted one of the 10 best white clematis. For interest the 10 best whites were: 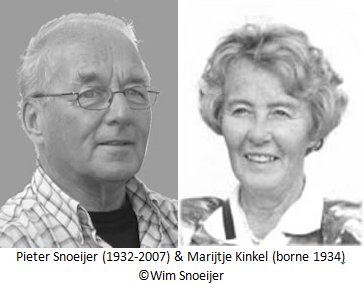 To pick up on a point I mentioned above; Wim Snoeijer named C. 'Zofofri' FOREVER FRIENDS after his father, Pieter Snoeijer, who died in September 2007.

Wim tells me that he used the flowers of C. 'Zofofri' FOREVER FRIENDS in the flower arrangement he made on the coffin in combination with a dark blue diversifolia (which J. van Zoest B.V did not introduce). I am sure that his father would have appreciated both the thought and the lovely display.

I finish this article with a picture of C. 'Zofofri' FOREVER FRIENDS growing in the garden of Wim Snoeijer. It is always good to know that the breeder likes his own creations enough to plant them in his own garden! 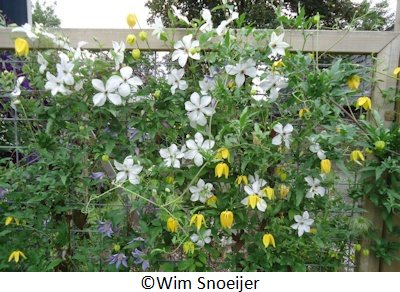